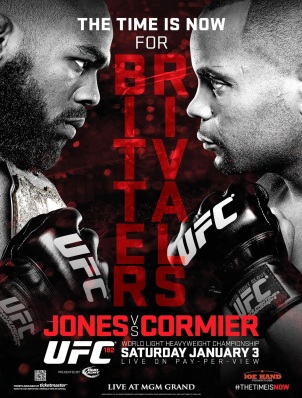 MMA Fighting has the UFC 182 fight card for the upcoming Jones VS Cormier event in January 3,2015 at the MGM Garden Grand Arena in Las Vegas Nevada.It’s the main event of the evening. After their brawl, this is what they said in FOX Interview:

Jones: Hey p—y, are you still there?
Cormier: I’m here. You are just the fakest person! I actually admire that you can be this fake and when the TV comes on you can just change. You’re like a chameleon. It’s awesome. It’s unbelievable.

Jones: Hey, I’m a professional. The fact that you’re a p–y hasn’t changed.
Cormier: It’s unbelievable just how fake you can be! You’re such a f—–g p—y! My god! It is amazing! But hats off to you, you got a great PR person. They do a great job training you, because you are just terrible. You’re the f—–g scum of the earth. You’re a terrible human being, but you can sure turn it on.

Jones: Thank you.
Cormier: I wish they would let me next door so I could spit in your f——g face.

Jones: You know I would absolutely kill you if you ever did something like that.
Cormier: You could never kill me.

Jones: Oh, I bet you I could.
Cormier: Then you should try, Jon. You really should try.

The Battle Of The Century Is Coming,5 days left still counting for this fight…