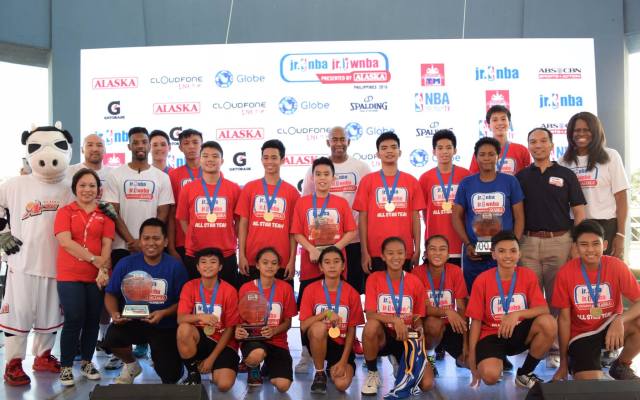 After weeks and months of conducting Alaska Jr. NBA/Jr. WNBA Regional Selection to pick the best of the best from Baguio, Davao, Cebu and Manila, the top 50 boys and 24 girls from each regions were advanced to the final selection stage in National Training Camp at The Don Bosco  Makati on April 22-24.  During the 3 days, they were individually scored on how they play and how they applied what they have learned.  In the morning of day 3, twenty girls and 20 boys were chosen and grouped to play the final game.  And after the Adrenaline-boosted game, 10 boys and 5 girls were chosen to be the Alaska Jr. NBA and Jr. WNBA All-Stars 2015.
HERE ARE THE WINNERS:
FEMALE ALL-STAR
MALE ALL-STARS
The All-Star Team will travel overseas for their NBA experience trip together with fellow Jr. NBA All-Stars from Thailand, Malaysia, Vietnam and Indonesia.
Special awards were also given to boys and girls who exude exemplary characteristics.  Top male and female coaches were also picked.
Here is the complete list:
COACHES OF THE YEAR:
FEMALE:
PASIG – Arayi Ewon
MALE:
DAVAO – Elegino Chollo
RISING STAR:
FEMALE:  Carly Monreal
MALE:  Victorino Torres III
HUSTLE AWARD:
FEMALE:  Kate Buenaventura
MALE:  Jericho Ross Paglinawan
ALL-STAR PLAYER OF THE GAME
FEMALE:  Aloha Marie Betanio
MALE:  Tracy Carl Dadang
SPORTSMANSHIP AWARD:
FEMALE:  Imee Claire Matas
MALE:  Alfonso Candari
ALASKA AMBASSADOR:
FEMALE:  Rozie Amatong
MALE:  Julian Alfonso Jugo
NTC MVP:
FEMALE:  Florence Jil Talas
MALE:  Kai Zachary Sotto
More than 36,00 players and 2,700 coaches have participated in the program since it started in the Philippines in 2007.  The Jr. NBA and Jr. WNBA is the league’s global youth basketball participation program for boys and girls which teaches the fundamental skills as well as the core values of the game at the grassroots level in an effort to help grow and improve the youth basketball experience for players, coaches and parents.
For more photos,  videos and stories, click the logo: