One half of the bandana brothers, Jayjay “The Fast” Helterbrand reportedly to sign one-year extension in Ginebra.

After helping Ginebra to end their 8 year championship drought, everyone thought that game 6 of the finals will be his last playing game in PBA.
Tim Cone confirmed the news: “He will be back. He will sign for another year,”
This will set up another year of playing time for The Fast and The Furious.
The 2009 Season MVP, Jayjay will most probably become a part of Ginebra’s 3rd stringers but that was not important to the fans as they just want to see their idol in Ginebra uniform for one last time. 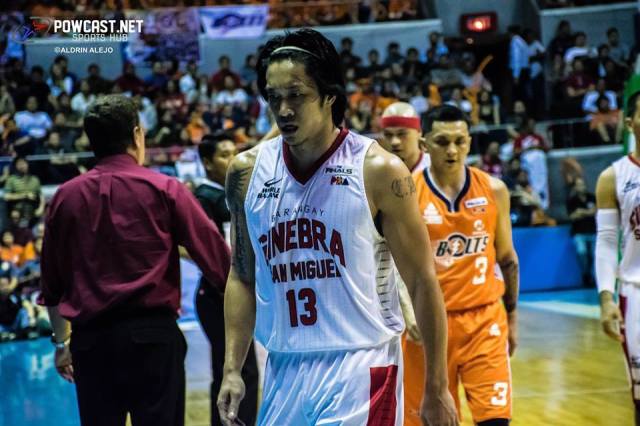 Jayjay Helterbrand was born in Quezon City on October 14, 1976 to Lamberto Heras Vicente and Melanie Jimenez Romero. The name on his birth certificate was Lamberto Romero Vicente, Jr.

His father later died, and his mother took him along with his brother Francis and sister Rowena to the US when he was six. His mother remarried a US serviceman Ronald Helterbrand and changed his name to Anthony Helterbrand in 1986 at the age of 10.

Jayjay Helterbrand first played in the league in year 2000 as direct hire by the Barangay Ginebra Kings. Known by many as Helter Skelter, the other half of “bandana brothers” and the so called “The Fast and The Furious”. He played his entire pro-career with the Barangay Ginebra and won multiple championship from 2004-2007 PBA season. He has a total of five championship, the 2004 Fiesta Cup, 2005-2006 Philippine Cup, 2006-2007 Philippine Cup, 2008 Fiesta Cup and the recently captured 2016 Govenors’ Cup. Jayjay Helterbrand has won Finals MVP in 2006-2007 Philippine Cup and season MVP in 2008-2009 season.


The 7x PBA All-Star has two daughters aged 21 and 16, living with his parents in the United States. He is currently in a relationship with actress RR Enriquez.