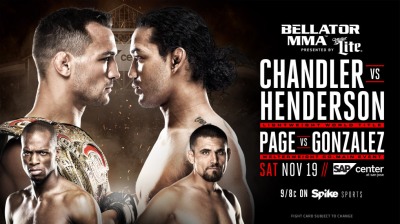 SANTA MONICA, CALIF – It’s a fight that both men have had their sights set on for quite some time, and now it serves as the main event of Bellator MMA’s return to the at SAP Center in San Jose, Calif. on Nov. 19, when Michael Chandler (15-3) defends his Bellator MMA Lightweight Championship against Benson Henderson (24-6).

The tilt anchors a card that also features a welterweight feature bout pitting undefeated British striker Michael “Venom” Page (11-0) against Menifee, Calif., native Fernando Gonzalez (25-13), after the two had originally been scheduled to fight at “Bellator 151” and “Bellator 158.”

“Iron” Michael Chandler will look to defend his belt for the first time since having it wrapped around his waist following a devastating first-round knockout over Patricky “Pitbull” at “Bellator 157: Dynamite 2.” A 15-fight veteran of Bellator MMA, Chandler has consistently proven that he belongs among the world’s elite; collecting memorable wins over who’s who at 155-pounds including UFC lightweight champion Eddie Alvarez. The 30-year-old Missouri native now looks to capture his third career title defense, after successfully defending the belt at both “Bellator 85” and “Bellator 97” during his 2013 reign. The veteran enters his fight with “Smooth” riding a hot streak of three straight victories and now sets his sights on handing Henderson his first Bellator MMA loss at lightweight.

The highly anticipated professional mixed martial arts debut of Kevin “Baby Slice” Ferguson Jr. will come against Aaron Hamilton in a welterweight bout during the preliminary portion of the card.

About Bellator MMA:
Bellator MMA is a leading Mixed Martial Arts organization featuring many of the best fighters in the world. Under the direction of veteran fight promoter Scott Coker, Bellator is available to nearly 500 million homes worldwide in over 140 countries. In the United States, Bellator can be seen on Spike, the MMA television leader.  Bellator MMA is comprised of an executive team that includes top industry professionals in television production, live event orchestration, fighter development/relations, venue procurement, sponsorship creation/development, international licensing, marketing, advertising, publicity and commission relations.  Bellator is based in Santa Monica, California and owned by entertainment giant Viacom, home to the world’s premier entertainment brands that connect with audiences through compelling content across television, motion picture, online and mobile platforms.

About Spike:
Spike is available in 98.7 million homes and is a division of Viacom Media Networks.  A unit of Viacom (NASDAQ: VIA, VIAB), Viacom Media Networks is one of the world’s leading creators of programming and content across all media platforms.  Spike’s Internet address is http://www.spike.com and for up-to-the-minute and archival press information and photographs, visit Spike’s press site at http://www.spike.com/press.  Follow us on Twitter @spiketvpr for the latest in breaking news updates, behind-the-scenes information and photos.