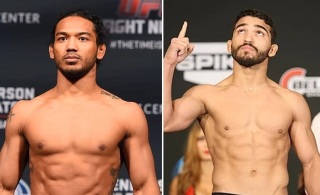 Bellator 160: Henderson vs. Pitbull takes place Aug 26 at the Honda Center in Anaheim, CA. LIVE and FREE on SPIKE.

This will be the second fight of former UFC lightweight champion Benson Henderson booked at Bellator. This time he will return to his lightweight class and compete with a former featherweight champion who’s on the other hand going up a weight class Patricio ‘Pitbull’ Freire for lightweight title shot. Bendo was defeated by Andrey Koreshkov on his debut Bellator 153 Welterweight Championship bout on April 2015. In the same event Pitbull fought Henry Corrales as the co main and won by submission.

The winner of this fight will contend for the Bellator Lightweight Championship against Michael Chandler Jr.- the current Champion who brutally finished the elder Freire during the co-main event of last week’s Bellator: Dynamite 2 event. Pitbull is seeking revenge for his brother.

Additional contests in the card will be announced in the coming weeks.