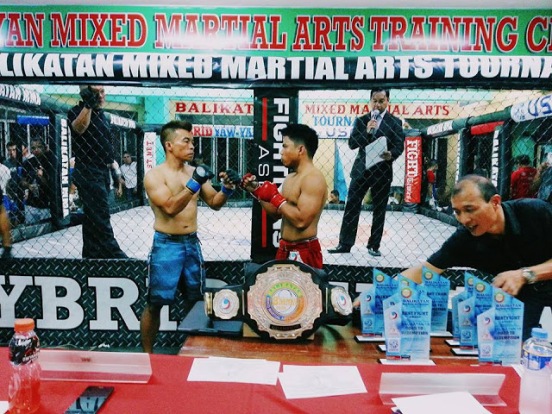 John Joseph Tabang is the recipient of the first ever PRO-AM Championship Belt in the recently concluded Balikatan 19 held last April 29 at Hybrid Yaw Yan Gym Cubao, Quezon City.
Hybrid Yaw Yan’s J Tabang finished as the winner in the Pin Weight Championship main event of the Balikatan 19: Road to Redemption. After a series of extreme fist-fighting, kicking, swarking and choking, Tabang is now the Pin Weight Champion of Hybrid Yaw Yan after defeating USA Sikaran’s Reynold Vargas due to submission because of neck choke in the second round.
When asked about what did he think of his fight, he said that he did not fully use his fist-fighting style because he knew that the opponent was already looking forward to it so he resorted to take downs, corner plays and strangulation to win the game.
On his plans about being a professional fighter someday, he said that it’s every asian fighter’s dream and a great opportunity to fight in OneFC. But for now he is looking forward to more title defense and fights under Balikatan. He said that he is very thankful to Balikatan because of all the opportunities and help he gets as an amateur player.
Sir Henry Kobayashi, the promoter of the Balikatan series is very thankful to all the MMA fans who came to support Balikatan 19: Road to Redemption. When asked about his plans on putting up a professional league he said that for now, he will focus and continue doing Balikatan to help other gyms, amateurs and martial artists. He said that these events is a stepping stone to those who want to start and fight in MMA. Putting up a  professional league is not in his plans now or in the near future.
Balikatan 20 will be on July 29.
Toggle Sidebar