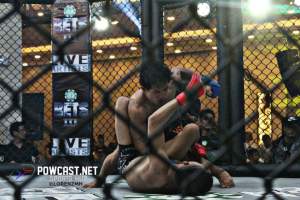 Newly crowned URCC Bantamweight Champion Drex Zamboanga is surely living it up right now!
The third excellent night of Universal Reality Combat Championship (URCC) at Casino Filipino Battle Extreme Tournament of Stars (CF BETS) featured a bout between the two “T-Rex” in the promotion Drex “The T-Rex” Zamboanga and Rex “T-Rex” De Lara as the main event on September 15 at Casino Filipino Pavilion, Manila Bay.
The young and hungry stalwart of Tough Guys International came out on top! The matchup went to be a chess match both on stand up and the ground during the first round. But Zamboanga has momentum going in his favor come second round as he was able to secure big takedowns, gaining top control. Punches were delivered and a heavy elbow inflicted a damage on the former champion’s nose deemed serious enough to stop the match giving Drex a TKO victory.
The busiest fighter of Hitman MMA John Adajar indeed showcased his much improving ways to Lee Min Hyeok. Last night was Adajar’s third fight for 2017. “The Outlaw is now riding a three fight win streak.
Adajar and Hyeok were exchanging by closing the distance and controlling the actions with their wrestling, leading to wild series of scrambles as two fished for submissions. Adajar came out to maintain the positions in round one. Hyeok was turning his opponent’s right leg to red with lowkicks, driving him into the fence. John Adajar’s big weapon for me last night was his knees which landed several times to the body and chin of Hyeok. His spinning back fist was pretty amazing, too. On the third round, some fast left and right combinations thrown by these welterweights making the crowd go wild and loud. Adajar made the korean’s URCC debut unsuccessful by pulling off the split decision victory.
A minute of the first round was all it took for Arvin Chan to have his opponent verbally tap out. “Asintado” had his six fight losing streak snapped in a big way.  Paulo Mendralla got taken down but never back up.
Pepito Masangkay Jr. unleashed his fury on Oyo Cruz near the end of the third round. He was constantly looking for the finish all two rounds, but Cruz’ toughness and defense made it not so easy for “Du30”. Masangkay landed a hard shot that put Cruz on the canvas, giving him a TKO victory inside round three.
Michael Fangki mix hard punches and dominant control on the ground after a hard takedown. Arjay Bongala’s left eye has some swelling over it after the first round. The fighter from Baguio rocked his opponent multiple times on the feet and managed to get down on the mat. Bongala worked his way back to his feet, but not for long. Fangki outpointed Bongala in a competetive bantamweight fight.
Yours truly was amazed and was not expecting that Ariel Oliveros will finish the fight against Eddie Estrada quickly. “The Lady Boxer” took the perfect opportunity to ground and hit Estrada’s face with hammer fists. He made a statement with this first round TKO win in his URCC debut. Same with Jhunnie Kimmayong.
After a dominant first round, he survived  a leglock attempt by EF Sevilla before the bell rang.  He came back with another dominant round in the 3rd to win the fight by way of unanimous decision. He displayed superior grappling and conditioning in this battle.
Here are the URCC CF BETS results:
Main Event
Bantamweight: Rex De Lara def. Drex Zamboanga by TKO in round 2
Co-main Event
Welterweight: John Adajar def. Lee Min Hyeok by split decision
Featherweight: Moon Seung Gyu def. Roel Rio by TKO in round 1
Welterweight: Arvin Chan def. Paulo Mandrela by verbal submission in round 1
Bantamweight: Pepito Masangkay Jr def. Oyo Cruz by TKO in round 3
Bantamweight: Michael Fangki def. Arjay Bongala via unanimous decision
Flyweight:  Lucky Mateo def. Chris Aplicador by unanimous decision
Strawweight: Ariel Oliveros def. Eddie Estrada via TKO in round 1
Strawweight: Jhunie Kimmayong def. EF Sevilla by unanimous decision 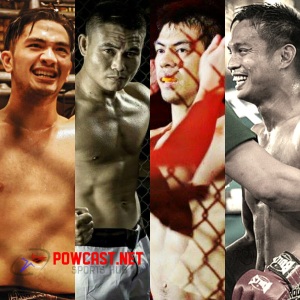 We are all excited for yet another excellent night of Universal Reality Combat Championship at Casino Filipino Battle Extreme Tournament of Stars and in this, the 3rd series of CF BETS, cast includes former champion Rex De Lara who looks to kick off once gain for the top against contender Drex Zamboanga for the bantamweight title.
Who will come out on top, the veteran and talented former URCC bantamweight champion of MUMMA/Deftac/Fight Factory or the young and hungry stalwart of Tough Guys International? Find out on September 15 at Casino Filipino Pavillon, Manila.
Drex Zamboanga is currently riding a 3 fight win streak. On his most recent fight, it was a first round submission win over Sem Bicaldo at URCC 28: Vindication in November of last year. All 3 of his victories come by way of submission and 2 knockouts.
Rex De Lara comes into this bout riding a 3 fight win streak also. He last fought at PXC 53 where he scored a unanimous decision win over Darwin Sagurit in April 2016. De Lara returns to URCC cage to grab the bantamweight strap back.
John Adajar was seen last April battling it out with Dunlee Stewart at the 2nd CF BETS. The “Outlaw” is back, but this time Adajar is up against Lee Min Hyeok.
This is going to be Adajar’s third fight for 2017. “The Outlaw” is the busiest fighter of of Hitman MMA. He made Jet Hermida verbally taps out at URCC XXX just last month. His ground game was on point! In every of his fight, he do improve. Adajar will continue to showcase his improving ways to Lee Min Hyeok from South Korea. Teammates Oyo Cruz and Chris Aplicador will step into the cage as well to grace the big night of fights.
Lee Min Hyeok will look to pick up his second straight win as a pro when he makes his URCC debut on Friday.
Arvin Chan seeks to pull this one out and secure a victory. He is coming off a loss and insatiably hungry to get in the win column. Azkhar Mozharov choked him in the first round of the very first CF BETS nine months ago. Chan and Joseph Alulod are squared to match up on Friday for a welterweight bout.
The weigh in will take place at Casino Filipino Pavillon which is also the fight venue on September 14 day before the fight night. The coverage will start at 10:00 AM and will also include the fighters’ last interview along with weigh ins.
Are we going to see another heated face off between these fighters? Find out! 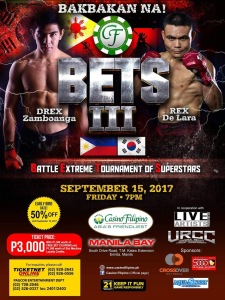