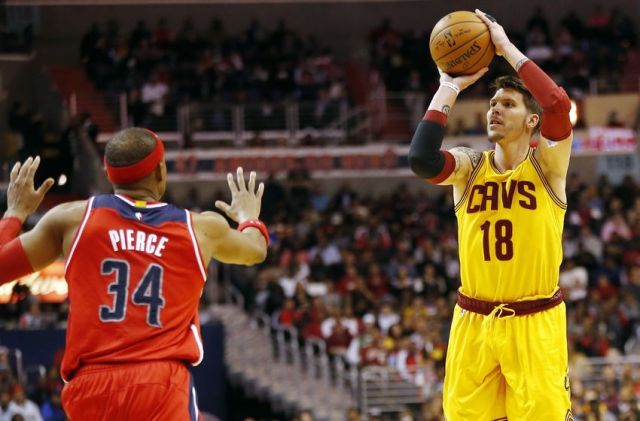 Once Miller clears waivers, the Denver Nuggets are among the teams with an interest in signing Miller. Denver pursued Miller aggressively in free agency a year ago, before Miller signed a deal with the Cleveland Cavaliers. Denver has 14 guaranteed contracts as it begins training camp this week.

The Blazers acquired Miller in the Brendan Haywood trade in July, receiving two future second-round picks from the Cleveland Cavaliers.

Depending on who you are, to say that this summer was taken over by the Heat may or may not be too puny. Regardless, Miami’s offseason has been one of the most amazing that any sports organization has ever had.

By now, everyone has their favorite nickname “Big Three,” as well as how they will work together.

However, while seemingly everyone is in agreement that the trio consists of LeBron, D-Wade and Chris Bosh, I argue that it is Mike Miller-and not Bosh- that will complete the “Miami Thrice.”

Bosh was talked about so much as the perfect compliment to either Wade or LeBron, but is he really?

Both Wade and James have similar styles — they are superb slashers with average to above average shooting. With that in mind, why would having an inside presence help? If anything, it clogs the lane when LeBron charges in.

People keep asking how to guard all three at the same time, but it isn’t that complicated. Double team Bosh inside and go man-on-man on Wade and LeBron. That way, when one of them drives the lane, there are already people there to help.

The only thing foiling that scheme is Mike Miller and his ability to snipe from beyond the arc.

With the two best slashers in the game, Miami’s best offense will involve spreading the floor and keeping the lane open for when Wade or James wants to drive. Teams will try to collapse their defense to stop this from happening, but with Miller and his career .405 three-point-percentage, the Heat won’t lose a beat.

If teams are truly set on keeping the middle cluttered, then the Heat can bring in a guy like Eddie House with Miller and have the two of them help LeBron shoot from mid-range to downtown. It becomes a pick your poison scenario.

You see, it is the ability to spread the floor and not low-post-efficiency that will get results for the Heat.

Not only is Miller one of the best shooters in the game, he is amazingly versatile. He can effectively play shooting guard and both of the forward positions, and has some of the best court vision you will see in someone his size. If he had played on better teams, he could be a household name.

While Miller doesn’t have the talent of Bosh, his skill set is much better suited for what the Heat are building.

In fact, LeBron knew this and that’s why it is rumored that James had already called Miller and told him to join him in Miami BEFORE he made “The Decision.”

If Bosh knows what is good for the team, he will be content with 10-15 points per game off of rebounds and put backs- That is where he is crucial.

Between Bosh, Ilgauskas, and Udonis Haslem, the Heat will need great low post defense, especially when playing a big team like the Lakers. They will also need to be huge on the offensive glass when LeBron or Wade has a bad night.

I’m not saying Bosh won’t be an important piece of the puzzle.

I’m just saying that if the Heat want multiple championships, the ability to do that lies with Miller…