7-time world heavyweight champion Paul Randall Wright Jr aka Big Show went to Manila for a meet-and-greet with the 30 ticket holders who won via electronic raffle on July 26, 6:30 PM, at the Mall of Asia Music Hall.

The World Wrestling Entertainment (WWE) star’s visit is part of the company’s efforts to promote their first show in the Philippines in seven years.

After the event, yours truly was able to have his picture with Shaq signed by The Giant.

“He’s a devil,” Big Show said about the retired NBA player Shaquille O’Neal as he put horns and tail on him.

The biggest athlete’s comedic side is showing. A match between Big Show and The Big Diesel is sure going to be fun to watch!

Big Show wants to Shaq chokeslam through the table when they face off according to Inquirer.net during an interview with the wrestler.

Last July 13 and ESPYS, Big Show Shaq insisted to battle with him at Wrestlemania 33. Their funny feud started in 2009, the guest host of Monday Night Raw was Shaq and came face-to-face with the Big Show. The follow up to that feud happened when the four-time NBA champion and participated in the WrestleMania 32’s 3rd Annual Andre The Giant Memorial Battle Royal on April 3, 2016.

The card is subject to change.

In the latest ESPN prank, Brock Lesnar pose as a security guard for ESPN.

ESPN maybe one of the coolest employer especially if you are a sports fan. ESPN likes to have a little fun with their employees.

While the rest of the United States were nervous because USA will be facing a tough team, Hulk Hogan was pumped up… here is his message to Germany… unfortunately  US lost.. and Hulk Hogan is  nowhere to be found. Oh well we love this guy, don’t worry no one will dare to bash you!

Batista vs Vince Lucero at CES MMA
Batista first MMA fight was successful, It was not impressive but hey a win is a win. Batista MMA debut is against a fat man name Vince Lucero. Batista 43 years old was not very impressive during the fight as he was back pedaling against Vince Lucer. Check out the Dave ‘Batista’ Bautista vs Vince Lucero – full fight Video CES MMA Event. The CES MMA: Real Pain event was hel October 6, 2012 at the Dunkin’ Donuts Center, Providence, Rhode Island, United States, Batista fought in the heavyweight (265 lbs, 120 kg) division.

What do you think of Batista’s performance? 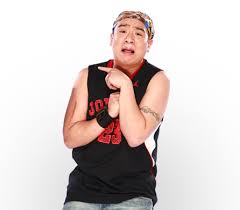 Vandolph  look alike from Japan vs 600 lbs Sumo wrestler Emmanuel Yarborough. This is some old school MMA from Japan. Japan is one of the country that like contact sports there are large contingent of fighters ranging from boxing, MMA and even professional wrestling entertainment. The video below feature one of the biggest MMA fighter that I ever seen so far. Check out how an average size fighter take on a 600 lbs Zumo wrestler.

Hugh Jackman have an upcoming sport movie, It is only right for him to promote it. But only few Actor has gone this far to promote a movie. Hugh Jackman the star of the upcoming futuristic boxing movie was featured in pro wrestling and he did some reel steel damage. Acting as the manager of Zach Ryder he was yelling and doing all he can to help his guy win the match. Yes he did just that by punching Zach Ryder’s opponent Dolph Ziggler straight in the face. Well they won the match but Dolp Ziggler was injured, check out the awesome Hugh Jackman WWE punch video.
Hugh Jackman WWE punch video
Hugh Jackman Reel Steel Movie Trailer
Support this site, Thanks!
Follow us on Twitter | Like us on Facebook | Download my Toolbar

Recognize these muscles? Its the Animal Batista, The former WWE Champion and Superstar who is famous for his explosiveness and big  muscles. Batista had been out of the limelight for sometime and from what I heard he tried to compete in a real fighting match like MMA. In fact I have seen some pictures of him training different Martial arts. But have you seen him lately?
You will be surprise one you see his transformation from a real bulky muscular guy to a skinny aged man. Is this for real Batista is skinny now.
Check out the recent skinny pictures of Batista.
Batista Skinny Pictures

What happened? Maybe he really want to loose weight to fight in MMA?

While browsing forums on PACLAND one of the member posted the video of Dennis Rodman vs Karl Malone. I watched and could not help but post it on my site as well. Watch as the soon to be Hall of Famer Dennis Rodman battle it out with Karl Malone inside the basketball court and inside the ring. Both guys gave a very entertaining show as they teamed up with Hollywood Hogan and Diamond Dallas.Real funny videos!

You see a lot of good moves in Greco-Roman Wresting but this one should top your list. Watch American junior wrestler Ellis Coleman show how the flying squirrel takedown is done. Amazing!

Flying squirrel move in slow motion Video
What do you think?

By BRIAN YALUNG | http://www.mb.com.ph
Edge reveals having Neuropraxia; not a storyline
Let us shy away for a minute from basketball. Though the WWE has been tagged as fake, the injuries that the stars are real. And now it has been reported that WWE champion Edge has been forced to retire and that it is a legitimate piece and not another storyline.
Wrestling entertainment has done a wonderful job offering people a physical but yet entertaining form of pastime, something that has evolved more into a show rather than a competitive sport. But just like what we see on their site or in television, the hazards are indeed real.
But this time, it seems that one superstar will actually be retiring “for real” and is not part of another storyline which the WWE has been good at doing. The latest WWE superstar that is reportedly forcibly saying goodbye is WWE Heavyweight champion Edge.
As most forcedly retired superstars, Edge is saying goodbye due to injuries that will reportedly never get medical clearance due to the seriousness of the injury. As per WWE.com, Edge has been suffering numbness and uncontrollable trembling in his arms and hands.
As per medical reports, these are symptoms of Neuropraxia, a condition in which a nerve remains in place after a severe injury although it no longer transmits impulses.
After undergoing an MRI along with these findings, it was revealed that Edge (or Adam Joseph Copeland), may never get medical clearance since this could result in paralysis or even death. Thus Edge has been forced to retire with a heavy heart.
While this may seem to be another storyline that WWE has been known for, various sources (including some from the WWE) have verified that the retirement is not a storyline and is actually legitimate.
Edge, now 37, bids goodbye to a fruitful 13 year career in the WWE. He held the WWE Heavyweight championship 7 times and the WWE belt for 4 times.
During the last episode of RAW, Edge was given the microphone to deliver his farewell speech which became emotional.
After his emotional farewell speech, Copeland was given a standing ovation from the WWE fans. Once in the WWE locker room, Edge received claps and hugs from other WWE superstars who along with wrestling fans will surely miss him.

GET MY UPDATES FASTER

Can you smell what “The Rock” is cooking? Dwayne ‘The Rock’ Johnson the former WWE Wresting superstar now a big movie star will be back in WWE.

Check out the video inside

CHECK OUT HOW I EARN EXTRA CASH