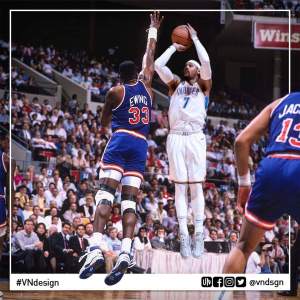 At 33 years old, Carmelo Anthony has played with three teams: Denver Nuggets, New York Knicks and this year he teamed up with Russel Westbrook and Paul George at Oklahoma City Thunders. His 14 years in the NBA is certainly an eventful career and one that would be called a good one especially as he continues to lead teams as a prolific scorer.  Recently, the 10x NBA All-Star has achieved another milestone and has passed another all-time great player in Patrick Ewing in the all-time scoring leader in the NBA.
Patrick Ewing has 24,815 total points in his career while Carmelo now has 24,829 and counting. The season is still young and looks like by the end of his career, Melo could potentially go up as high as top 10 but this year he might be able to already go as high at 18th place.
While this individual achievement seems to be very achievable for Melo, there is one thing that he, Patrick Ewing, including Karl Malone (2nd on the all-time scoring list) would probably not achieve and that’s to win an NBA championship.
These great players would have probably won championships but unfortunately, they existed before another great player. The likes of Michael Jordan and LeBron James and this year it would be no different as OKC are faced with other super team rivals in the west that put their chances of winning the championship from slim to none. 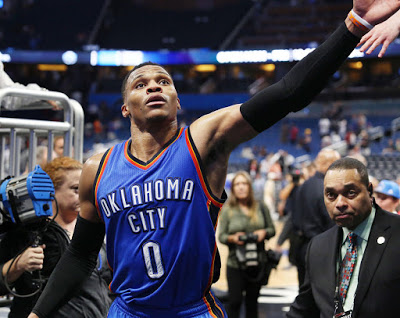 #0 Russell Westbrook of OKC
Oklahoma City Thunder once nearly destroyed the defending Champs Golden State Warriors in the Western Conference Finals 2 years ago. That was when Kevin Durant was working along with Russell Westbrook. Now the next chapter for them has unfolded, Rusell Westbrook will try to shut down the seemingly unstoppable Golden State Warriors, which Kevin Durant is now in. Westbrook along with Carmelo Anthony and Paul George bolstered the Thunder and became a major blockage on every team’s way to the NBA title this season.

Lightning strikes first before the thunder is heard

With the fast-paced gameplay of Russell Westbrook, he’ll struck every opponent like a lightning especially now that he is not alone to carry the whole team.  OKC’s transition plays would become even smoother with more accurate players to finish any play Westbrook may dish out.
Despite the shameful lost against Melbourne United due to the poor performance of the said killer trio, it is not a sign of the bad team performance. OKC still managed to give their key players some open looks, hence there is a good play execution, it’s just their finishers couldn’t connect to
deliver the basket and finish the play.

Westbrook is known to be a player who usually explodes with a triple-double performance in most of his games. This season it might not be seen frequently as it was before. It isn’t bad after all. An offense with scattered producers leads to better games for the team. A defense would not focus on a single man but will be diverted in every direction, thus decreasing its solidity and intensity, making it more penetrable.

The possibility of taking down the Super Team and end their era before it starts isn’t a matter of IF but is now a matter of when. When? When this two teams clash at the Western Conference Finals. It would be an unimaginable mayhem for vengeance or for a continuous regime. Carmelo, Russell and Paul added up to the roughness of the western road to the finals. The warriors would not take a walk in the park. OKC on GSW will be the best playoffs of the season.
Toggle Sidebar