Skip to content
Back against the wall, Ginebra played one of their best games in the conference defeating TNT, 125-101.
Justin Brownlee led the fight for Ginebra as he collected 31 points, 11 rebounds, 4 blocks, 2 assists and 2 steals in just three quarters as they are enjoying a big lead entering the last quarter. 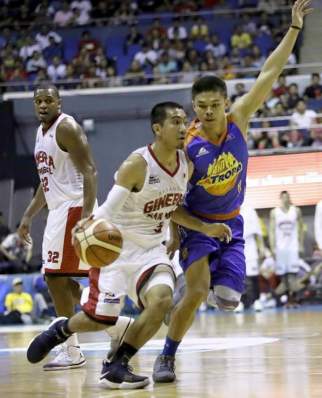 Brownlee also had a big help from the locals as Scottie Thompson, Japeth Aguilar, Sol Mercado and Joe Devance scored also in double digits, combining for 54 points.
TNT KaTropa were led by RR Garcia with 16 points and Mo Tautuaa who collected 15 points.
TNT’s import Joshua Smith went out of  the game halfway through the 2nd quarter with foot soreness and Ginebra just took advantage of it as they blew away the game open.
Robert Jaworki showed his usual support for the crowd darling, Ginebra as he showed up in the venue to cheer the team up who answered the call with this big victory.
Game 4 will be on Saturday, Tropang Texters will try to advance to the Finals while Ginebra will force a rubber match on Monday.
📸 credit to the owner.
Toggle Sidebar