The defending champions should be just fine without Steph Curry

The Golden State Warriors are getting their groove back as they are currently on a 4-game winning streak after a stunning loss at the hands of the Sacramento Kings. At 19-6, they are now just half a game behind the West-leading Houston Rockets.
However, things might need to change a little bit for the defending champions as they are currently dealing with another injury problem. This time, Stephen Curry, the two-time MVP, is reported to be sitting out for the next two weeks owing to the ankle injury that sustained during the Warriors’ win against the New Orleans Pelicans which was highlighted by a spat between Kevin Durant and DeMarcus Cousins. Both players were ejected, by the way.
The good news is, MRI results came back positively, showing that Curry’s ankle is still intact but also shows a significant amount of swelling and has to be evaluated for the next two weeks which means the Chef will be out starting against the Charlotte Hornets.
While Curry’s injury adds to the injury problem of the Warriors who also have Shaun Livingston, Zaza Pachulia and Patrick McCaw all doubtful to play against the Hornets, GSW will be just fine even without half of the Splash Brothers.

Why? Here’s why:
Kevin Durant has been playing like an MVP although he’s in 9th place in terms of total points per game, 4 places lower than Curry. With Curry out, expect Durant to take over much of the scoring load for the Warriors along with Klay Thompson and of course, Draymond Green. Sure, you will lose Curry’s 26 points per game average but Steve Kerr shouldn’t be worrying right now because GSW still has more scorers. 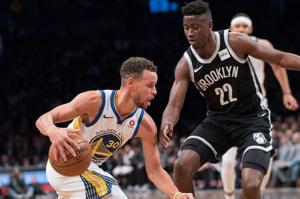 Steph Curry’s  season highs reminded everyone that the Warriors are still the team to beat.
With super teams left and right being formed heading into the 2017-2018 season, most people have predicted that it will be harder for the defending champions, the Golden State Warriors to dominate the league or at the very least, the Western Conference- something they have been doing during the past 3 seasons, to say the least. Sure, they were already countable times this season where the Warriors have been playing lost but most of the time, they were dominating. Most of the time, they are winning regardless of who Steve Kerr sends out on the floor.
Kevin Durant was out. Steph Curry fouled out. The Brooklyn Nets scored 42 and 27 in the 3rd and 4th quarter respectively and yet, none of those things mattered as the Warriors held on to beat the Nets, 118-111.
What happened? Check the numbers below:

With Kevin Durant not in uniform, Steph Curry carried most of the scoring load for the Warriors. He set two new season-highs with 39 points and 11 rebounds plus dishing out 7 assists.  He made 14 of 24 field goals including 4 of 10 from three. Aside from that, the Chef also had 3 steals, 7 turnovers and yes, 6 fouls. The latter two didn’t matter after all as long as you get the big W, right?

The Warriors won the game by making most of their scoring opportunities. As simple as that. As a team, GSW made 46 of 90 shots- good for 51% field goal shooting. They were even better than the Nets from three- making 10 of 24 attempts from rainbow country. Sure, the Nets made more threes than the Warriors but it all boiled down to making the shots that mattered, right?

The Nets were awarded 39 free throws which were a far cry from the Warriors’ 23. Now, out of those 39 attempts, Brooklyn only made 27.  Imagine the possibilities had the Nets made more of those freebies. Given how close the final score was, making more free throws would have allowed the Nets to pull out an upset win. Yes, they were able to fish 27 fouls from the Warriors and yet, they missed a big chunk of their free throws.

Wins like this can prove one thing: the Warriors are a dangerous team no matter who is out. They won an NBA championship before Kevin Durant joined and won another after Durant joined the team. Despite the fact that the rest of the West have been reloaded, Golden State will still find ways to win, to dominate, one way or another.

There were three things that enabled the champs to splash. Anew 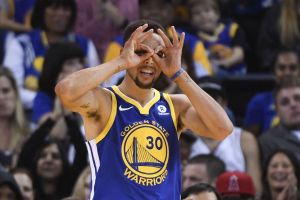 After a surprising loss to the Detroit Pistons, Stephen Curry and rest of the defending champions, Golden State Warriors quickly went back to work against the Los Angeles Clippers who are enjoying some sort of success during the early goings of the season despite losing former star point guard, Chris Paul who is now with the Houston Rockets but is currently injured.
Yesterday (Manila time), the Warriors started out splashing through in the first quarter and never looked back as they scored the highest number of points any team has scored this season, so far, en route to a 141-113 victory at Staples Center.
While GSW fans have grown accustomed to this kind of dominance by their team, this is different considering the mere fact that they’ve already dropped 3 games to open the regular season and that’s huge for a team that is loaded with stars, primarily heavy scorers. Now, speaking of scorers, let’s check the numbers that enabled GSW’s super scorers to run away from the Clippers:

Yep, folks. As mentioned above, that’s  the highest score any team has scored this season and it’s not surprising at all that the Warriors were the ones who able to do it considering that they are averaging 121 points per game- the best in the NBA.
4 of the 5 starters of Steve Kerr finished in double figures led by Curry who had 31 points who shot 7 of 11 from the three-point line, Kevin Durant had 19 while Draymond Green added 16 points to go along with his 9 rebounds and 6 assists. Klay Thompson, despite missing 3 of his 4 attempts from deep, scored 15. That’s 81 points from 4 players alone, folks. Keep in mind that every player Steve Kerr had sent against the Clippers had scored at least, 3 points. Now that’s how you dominate.

Sure, the Warriors attempted 29 shots from rainbow distance, making 14 of those shots. But that doesn’t mean they don’t know how to attack the shaded area because we all know and we all have witnessed them demolish defenders when they are attacking the paint.
Against the Clippers, the Warriors scored 64 points in the paint, alone- a far cry to what Los Angeles managed which is 40 points.
See? The Warriors have both an inside and an outside offense which makes them a scary team to play against despite their 5-3 record heading into their next game against the free-falling San Antonio Spurs.

If there’s one thing that the Warriors can perfectly do even during their sleep, it’s taking shots that have a high probability of hitting their targets. Sure, they shot 57% in the field against Detroit and yet they lost. Why? They only shot 37% from deep.
Against the Clippers, they made 58% of their 89 attempts. And they shot 48% from outside. Result= a big win.

The Clippers are still among the dark horses who can dethrone the Warriors come playoff time and yes, they will definitely get better after receiving such a heavy pounding from the champions.
For the Warriors on the other hand, a win on Friday against the Spurs- regardless if Kawhi Leonard finally plays or not, will send a message to the rest of the NBA that GSW is still very much capable of demolishing any team, at any given court, on any given schedule and if that 141 points that they’ve produced against Los Angeles don’t worry you, then you are doomed.

Looking for NBA Game Tickets? Click this affiliate link and get the Best selection of NBA tickets on StubHub! . When you click the link and buy, this website will gets a commission. Thank you!

Stephen Curry had a really bad shooting game.
Watch as Steve Kerr provided words or encouragement and motivation to his beloved point guard.
Having a coach who believes in you will make you start to believe in yourself. And the more you believe in yourself, the better you will be as a player.
Steve Kerr on most cases probably would stay composed and even-tempered.
He really ain’t got the right to be furious especially when your team is roaring and in full swing but the game between the Sacramento Kings was just a different story.
The Warriors coach loses it and eventually got ejected and what’s worse? They lost.
Check out his reaction below: 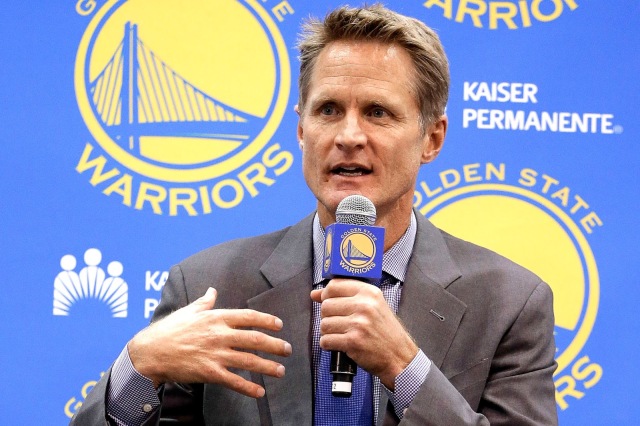 Golden State Warriors coach Steve Kerr will take a leave of absence as he recovers from back surgery and will be replaced on an interim basis by Luke Walton.

The Warriors announced Thursday that Kerr will need time off for rehabilitation and recovery. Kerr underwent back surgery to repair a ruptured disc in late July and had follow-up surgery in September.

“After the first two days of training camp, I realized I need to take a step back and focus on my rehabilitation in order to be ready for the grind of another NBA season,” Kerr said in a statement. ”As I noted last week, my summer was difficult and no fun due to the multiple back surgeries. At this point, I simply want to get healthy and back to my normal daily routine on and off the court.”

2015 NBA WORLD CHAMPS!
I will do my best to segment this and give you highlights as well.
Coach:
Steve Kerr to date winning-est coach in NBA with 63-20 he surpassed Paul Westphal in 1992-1993 season.
Kerr also became the first rookie coach to win an NBA Championship since Pat Riley, a record that was made since 1982 with LA Lakers. -The year I was born 🙂 –
Here is a brief press conference of the 2015 NBA Champ Coach
No Copyright infringement intended
Steph Curry – A feat that should not be overlooked, His team beat all other first NBA team through out the playoffs. Warriors beat Pelicans (with Anthony Davis) , then defeated The Grizzlies (Marc Gasol), then went on to beat Houston  (With James Harden), and defeated the best player LBJ. Curry led his team this finals with 26  PPG 5.2 RBG and 6.2 APG . If you are not impressed then let me add this fact, Curry is the 3rd PG to win an MVP and NBA title the same year, previous two were Bob Cousy and Magic Johnson.
No Copyright infringement intended
Curry also set a record for most 3 point conversion in the post season with 98 3-pointers.
(Previous record Reggie miller with 58)
No Copyright infringement intended
Shout out to #Free Dawkins for the Videos.
That’s about it . I will be writing more articles about this 2015 NBA Finals.
Keep it posted here @ powcast.net
Toggle Sidebar