Skip to content
Yao Ming’s full retirement video.
The best and the most popular basketball player to ever come out of China had his jersey retired.

The Naismith Memorial Basketball Hall of Fame will welcome three new members on Friday at the Induction Ceremony in Springfield, Massachusetts. The ceremony will begin at 6:30 pm ET and it will be aired live on NBA TV.

The presenters are as follows:

On July 20, 2011, the first overall pick of 2002 NBA Draft Yao Ming announces his early retirement in the NBA. His injuries in Ankle and Foot including the third fracture to his left foot causes him to retired early. The Rockets 8x NBA All Star Center averages 19.0 points per game and 9.2 rebounds per game.

2003 Sporting News Rookie of the Year

2003 Laureus Newcomer of the Year 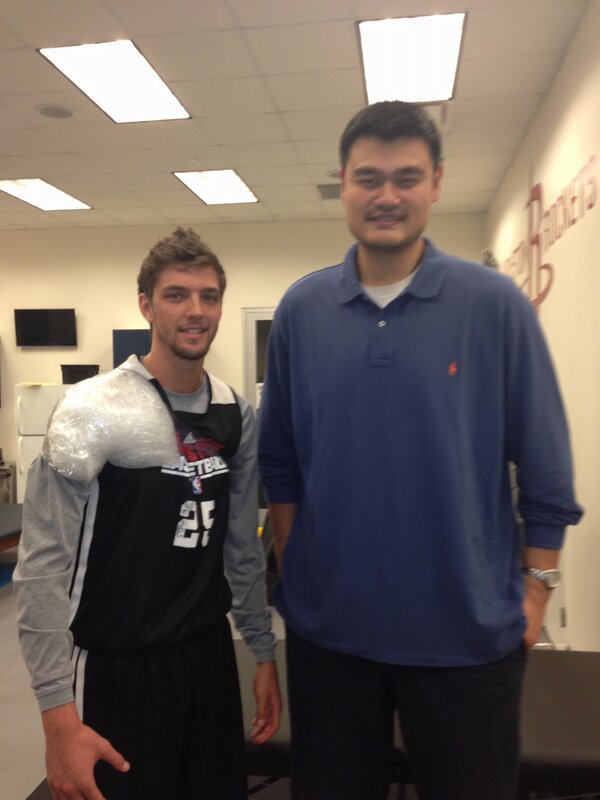 look at the big hand of Chandler Parson

Yao Ming recently visited his old US team the Houston Rockets before the game against the Golden State Warriors, and it looked like it inspired his fellow Asian Jeremy Lin to perform, crushing Golden States to a 140 – 109 victory, lead by Jeremy Lin’s 28 points.

Let’s talk about Yao, the 8 year Rockets player is studying economics and running a wine business in China.  He was asked recently about how he feels if the Rockets retire his jersey.

According to Howard Chen, CSN Houston:

Yao was selected as an All-Star all eight years of his career, a career that was shortened by a foot injury. The Rockets have said they’re planning on retiring his jersey – something Yao says he hasn’t thought much about yet.
“I don’t know how many times I played on this court, but every time I look up to the jerseys in the sky: Rudy (Tomjanovich), (Calvin) Murphy, Hakeem (Olajuwon), Moses (Malone). Those names are like a mark…I’m way behind them. It should be a great honor.”
Currently, Yao is running a wine business and is also back in school – studying economics and media.
“I know a lot of the players here finish school first and then come to play professional basketball,” Yao said. “I’m the reverse. I have to go back to school after playing my career. Anyway, that’s the way to keep me busy and keep me learning.”

VIDEO: Yao Ming discusses what it’s like to be back in Houston
I have seen a lot of art works out there and frankly I am not easily impress with some of them. Well when your use to seeing a lot of amazing stuff online it seems ordinary seeing this kind of Art. So why am I posting it then, Hmmp? Its because its sports related and I like Yao Ming. Well to give credit to the artist it was really hard painting and dribbling at the same time.
Painting with basketball, What do you think?

Yao Ming perhaps the most famous international player of the NBA and one of the reason why NBA basketball became global will retire?  Yao Ming Retires?!
Yao Ming who stand 7’5 and  averages of 19.0 points, 9.3 rebounds and 1.9 blocked shots per game had been plagued by injuries, a series of operations and treatments had been done however he was not able to fully recover from it.
Yao Ming allegedly already informed the Houston Rockets and the NBA of his decision and would probably officially announce it with a press conference soon.
Basketball fans will truly miss the entertaining gentle giant as he was one of the icon of global basketball. (source)

Get updates straight from your browser download POWCAST.NET toolbar now

(AP) HOUSTON – Yao Ming says his surgically repaired left ankle is healing properly and he would like to remain with the Houston Rockets.

Yao said Thursday that he won’t know until later this summer if he’ll be able to play next season. He becomes a restricted free agent July 1.

A stress fracture in the ankle kept Yao out of all but five games last season and he had surgery in January.

Yao spoke during a visit to a Houston elementary school. He answered questions in English, and taught the children to say “good morning” in his native Chinese. 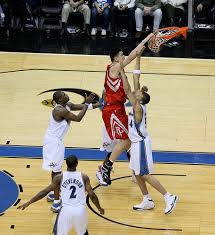 HOUSTON — Houston Rockets All-Star center Yao Ming is confident that he’ll be ready for the start of the regular season after a team doctor declared his surgically repaired foot fully healed.

The Rockets had said all along that they expected Yao to play in 2010-11. Yao was still relieved when he got the official diagnosis.

“I am very excited,” Yao said Tuesday. “I am just looking forward to playing a great season. I think I can count on my foot now.”

The 7-foot-6 Yao sweated through a gray T-shirt during a vigorous workout for reporters at the Toyota Center. He mostly worked on post moves with teammate Chuck Hayes and 7-footer James Cripe, a player in the NBA’s developmental league.

He landed awkwardly on his left foot at one point, wincing in pain. He resumed the workout a few seconds later, and said he’s less afraid to test the foot than he was two months ago, when he started running again.

“That’s just the confidence,” Yao said. “I think everybody would have that after a foot injury, and (I’m) just still a little bit weak on that. I just need to continue to build on that. Compared to two months ago, it’s really a lot better.”

General manager Daryl Morey says the team will be cautious with Yao and limit his minutes early in the season. Morey said Clanton’s diagnosis was a “key hurdle” in Yao’s road back.

“It’s great news,” Morey said. “It’s what we anticipated, but until you get over these milestones, you’re never for sure. He looks like his old self. He still has a ways to go on his wind and things like that. But it’s just good to see him out there.”

Early in his recovery, Yao had doubts about his future. In the month after he was told that he would likely miss the 2009-10 season, Yao said he secluded himself and hoped to find out later that the doctors had somehow made a mistake.

“That was really a hard month for me,” Yao said. “I got a lot of phone calls from the Rockets staff, coaches, players, teammates and my friends and of course, my family will always be there to stay with me.

“That was the hardest time, (and it’s) already passed. Now, we’re looking forward and making something good.”

The Rockets open training camp on Sept. 25. They will travel to China in mid-October for two preseason games against New Jersey.

At this point, Yao seems more concerned about rebuilding his stamina than re-injuring his foot. He said he’s lost 40 pounds in the last 3 1/2 months, and still wants to lose 10-15 more pounds before the regular season begins.

“I’m really, really not in good shape right now,” he said. “I’m probably a little bit away from game shape. The good news is we still have one month until training camp, and two months to the season.”

A seven-time All-Star, Yao has averaged 19.1 points and 9.3 rebounds in seven seasons since the Rockets drafted him with the No. 1 overall pick in 2002.

Yao, who turns 30 on Sept. 12, said he’s fought the urge to push himself too hard as he tries to regain his old form. The Rockets’ medical staff advised Yao throughout his recovery that he needed to scale back his workouts.

“The doctors say, ‘No, you need to slow down,'” he said. “‘Step by step, you need to learn walking before you start running.’ That’s what they said. They said I’ve got to be patient with it. But I’m very happy.”
Continue…

Yao Ming the biggest basketball star yet to be ever produced by China and the whole Asia is contemplating quitting basketball.

When Yao Ming is healthy He is able to dominate and dictate the game, Yao broke his foot during the 2009 Western Conference semifinals against the Los Angeles Lakers. He missed the rest of the playoffs and the entire 2010 season.

Yao who amidst his injury is still eager to get into the court and play the game he love is worried, he says that he might retire from basketball if his foot doesn’t completely heal.

“If the foot injury does not heal next season, I might choose to call it quits,” Yao

Also according to ESPN he most likely will not play in the 2012 Summer Olympics in London.

Yao opened up big opportunities for Asian sports athlete and if He so choose to call it quits, then it will be a while before we can fine the stature and the charisma of Yao, literally and figuratively.

Increase traffic to your site now!

Houston Rockets center Yao Ming(notes) and his wife, Ye Li, are now the parents of a baby girl born in Houston on Friday. The baby, whose name was not released, weighs seven pounds and nine ounces.

Both Ye Li and the baby are in good health. The girl is the couple’s first child.

“I am very excited about the arrival of our daughter,” Yao said in a statement. “This is a very special moment in our lives and we thank everyone for their kindness and support.”