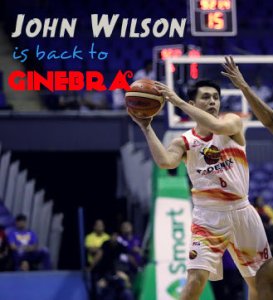 John Wilson is back to where it all started for him in the PBA.

With the 2010 7th overall pick in the PBA, the Barangay Ginebra chose John Wilson of the Jose Rizal University.
This was the signal of the beginning of the career of the once highly touted John Wilson. He spent two years wearing the Ginebra uniform but did not actually lived up to the billing as he only averaged just about 3 points per game in his first two years and tallied his worst shooting career percentage with the Kings. Expectedly, he was shipped out to Air21 in his second year who also did not quite got what they were looking for.
Wilson was traded again to Meralco. His stint with the Bolts was his best year averaging as high as 8.5 points and playing almost 20 minutes per game.
Throughout his career, he was able to play with 5 teams including Ginebra, Air21, Meralco, NLEX and Phoenix. At the age of 30, he found himself looking for another team and fortunately he was given another chance.

Wilson is getting his second chance at donning the jersey of the most popular basketball team in the Philippines and it is all because of hard work and dedication.
There are a number of players who tried out for the spot and above anyone else, showed better performance and a better fit for the current Ginebra team who is looking for a shooter who can help them improve their outside presence.
Wilson will sign to play for the current All Filipino Conference only, but we won’t be surprised to see him get an extension if he plays well with the team.

Do you think John Wilson is a good pick up or should Ginebra pick someone else instead?