There are a lot of changes this off season and there’s a lot of player who will have a chance of showing their real skills.

Here are the top 3 players on my mind that will have a big jump in terms of their stats.

1. Harrison Barnes (Dallas Mavericks): This guys was spectacular in the record breaking run of the Warriors last season. He was the 4th best player in that team behind the Big 3 (Curry, Thompson and Green). He has a limited playing time in that team due to Iguodala’s defensive role with them.

Barnes signed with Dallas Mavericks last summer and it looks like a very good move for his career. He will now be a starter in that team and will have a plenty of playing time to show his real skills.

I predict that Kristaps will be a big factor of Knick’s success this season, He will not have a very big jump in terms of his stats but the reason why I ranked him 2nd is his effect to the team.

Predicted Next Season Average: 16 points, 10 rebounds and 2.5 blocks per game

3. Dennis Schröder (Atlanta Hawks): Known as the backup point guard of Jeff Teague, this player was one of the best defensive players in the league while contributing 11 points and 4.4 assists per game and playing limited minutes for Atlanta Hawks.

Now Teague had been traded to Indiana and Horford signs with the Celtics, He will now be the main man of this Atlanta Squad alongside with Millsap, Bazemore and Korver. 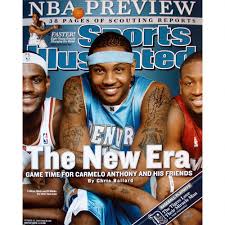 NEW YORK — When Spike Lee chose his wardrobe for Sunday’s exhibition game at Madison Square Garden between Team USA and France, there was nothing random about it.

Lee selected a Team USA No. 15. jersey. That’s the number Carmelo Anthony donned in helping the Americans to a 2008 Olympic gold medal and the one he wears for the Denver Nuggets.

“It wasn’t haphazard,” the filmmaker and No. 1 Knicks fan said in an interview with FanHouse about picking a jersey to show how much he wants Anthony to sign with New York, if he opts out of his contract and becomes a free agent next summer.

The Knicks lost out on LeBron James, the top free agent this summer who went to Miami, and settled for signing Amar’e Stoudemire. Lee is now hoping they can get Anthony, who could be next season’s top free agent.


Speaking to reporters Saturday at his annual basketball camp in the Denver area, Anthony did not offer a lot of clues about his plans. Lee figures to try to influence him if Anthony hasn’t made a decision by Dec. 12, Denver’s one regular-season appearance next season in New York.

“I know him,” Lee said of Anthony, a native of Brooklyn, N.Y., where Lee grew up. “We’re not tight, tight. Brooklyn guys, we stick together.”

As for James, Lee didn’t have too much to say about him.


Now Anthony will do what he feels he has to do. But, even if he chooses New York, Lee won’t be able to wear a No. 15 Anthony-Knicks jersey to Madison Square Garden. The team has retired that number in honor of Dick McGuire and Earl Monroe.

Chris Tomasson can be reached at tomasson@fanhouse.com or on Twitter@christomasson
READ MORE…