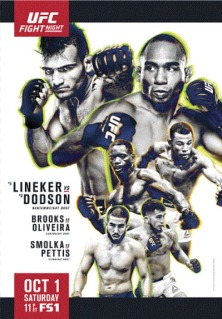 UFC returns to Portland, Oregon on October 1, 2016 at Moda Center.

In the main event, John Lineker and former two-time UFC Flyweight Championship challenger and The Ultimate Fighter: Team Bisping vs. Team Miller winner John Dodson will go against each other for the bantamweight bout.

This is going to be the second fight of former Bellator Lightweight Champion Will Brooks in the octagon after his successful debut over Ross Pearson. He will face Alex Oliveira next.

On September 9, Brian Ortega and Bobby Green were expected to face Hacran Dias and Joshua Burkman respectively, but pulled out from their bouts. Ortega was replaced by Andre Fili, while Green was replaced by promotional newcomer Zak Ottow.

On September 22, Sergio Pettis was scheduled to face Louis Smolka, but pulled out also of the fight due to a minor injury. Smolka is now expected to face Brandon Moreno.

At the weigh-ins, all 24 fighters stepped on the scale Friday. Lineker was .5 lbs. over the bantamweight limit, Oliveira was 5.5 lbs. over the lightweight limit and Dias was 2.5 pounds over the featherweight limit. The three will forfeit 20% of purse which will go to their opponents.

Lightweight: Will Brooks vs. Alex Oliveira