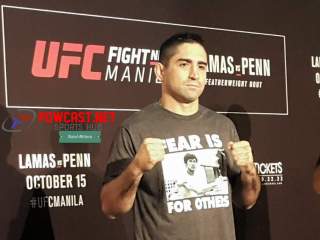 Ricardo Lamas was hoping that UFC find an opponent for him and get him on the card very soon. Looks like UFC made sure that his bucket list wish granted.

According to FloCombat, sources close to the bout that The Ultimate Fighter: Latin America 3 Finale targets the matchup between Lamas and Charles Oliveira on Nov. 5 in Mexico City.

The no. 4 in UFC featherweight rankings, Ricardo ‘The Bully’ Lamas  was originally slated to face the former two division world champion BJ Penn at Fight Night 97 on Oct. 15, but Penn’s rib was injured and pulled out of the fight. Due to the loss of the main event, the entire card was scrapped by the UFC.

The promotion said all the fighters on the Manila card would be rescheduled, and it appears the UFC has wasted no time in doing so.

The Chicago native has found success in three of his past five showings inside the Octagon, and suffered a unanimous decision defeat at the hands of Max Holloway in his most recent outing.

Oliveria has been on a similar trajectory as of late, and will enter the bout with Lamas coming off a setback of his own as the Brazilian grappling ace was defeated by Anthony Pettis.

Photo credit: sherdog
After tonight’s brilliant and quick submission victory against Carlos Condit at the Rogers Arena in Vancouver, British Columbia Canada, Demian Maia went very emotional having six straight wins and defeated the man he respects. Carlos Condit is a champion for him. He picked the Natural Born Killer over Robbie Lawler at UFC 195. Eyes were teary during the interview with Brian Stann. Maia wants a title shot. He is willing to wait and fight the winner of Stephen Thompson vs Tyron Woodley. The Wonderboy was at that time in the audience who apparently have so much respect also to the BJJ master inside the octagon.
When I saw Damian took his opponent on the ground, I knew Carlos was in trouble. Maia dug his arm under Condit’s neck and held on tight as Condit tried to flip him off but Maia secured a first-round rear naked choke win after Condit tapped out. I remember when he thought of retiring after his loss to Lawler. Who knows what is next to this one the best welterweights. We will see.

Photo credit: sherdog
Anthony Pettis earned his featherweight debut and much needed win. It was a shockingly submission win over the BJJ blackbelt Charles Oliveira known for his submissions. ‘Showtime’ survived the guillotine choke attempt by “Do Bronx” and reversed. Pettis gets the tap in the third round. A beautiful and huge comeback for the former lightweight champion.
Paige VanZant silenced her haters who see her more as a Dancing with the Stars girl rather than a fighter. Bec Rawlings was finished with a nasty flying switch kick by the blonde fighter. She bounced back after her loss to Rose Namajunas last December.
Jim Miller and Joe Lauzon also put on a battle that went to three rounds and earned them another Fight of the Night honor but Miller defeated Lauzon by a split-decision. Damian Maia and Paige VanZant received the Performance of the Night bonuses.
The UFC Vancouver fight card results are as follows:
Welterweight: Demian Maia def. Carlos Condit by Submission (rear-naked choke) in round 1
Featherweight: Anthony Pettis def. Charles Oliveira by Submission (guillotine choke) in round 3
Women’s Strawweight: Paige VanZant def. Bec Rawlings by TKO (head kick and flying punches) in round 2
Lightweight Jim Miller def. Joe Lauzon by Decision (Split)
Middleweight Sam Alvey def. Kevin Casey by TKO (punches) in round 2
Featherweight: Kyle Bochniak def. Enrique Barzola by Decision (Split)
Middleweight: Alessio Di Chirico def. Garreth McLellan by Decision (Split)
Lightweight: Felipe Silva def. Shane Campbell by TKO (punches) in round 1
Catchweight: Chad Laprise def. Thibault gouti by TKO (punches) in round 1
Lightweight: Jeremy Kennedy def. Alessandro Ricci by Decision (unanimous)
Toggle Sidebar