Skip to content
Tim Cone is just left overwhelmed by the Ginebra crowd after going through a tough series against his former team Star Hotshots (Purefoods Franchise). This series has been a game of adjustments for both squads from a coaching stand point and who ever gets to execute these adjustments and gets the momentum gets that W.
“Coach Chito has made a really great adjustment playing Ramos, it just really spreads us out and Ramos had a big game.” Cone talks about how the Star Coach did an excellent job in scouting them and making the key adjustments which made them do in game plans to alter the other side’s momentum.
“It was an amazing series, I feel bad for Ping cause he played tremedously the whole way through.” Cone said.
Sol Mercado who always serves as the energizer of the Ginebra squad has been recognized by Coach Tim Cone but what stood out is the person who have made a great impact to their games in the absence of Joe Devance.
“I thought that the MVP of the series, if we could choose one, it would’ve been Jervy Cruz, he’s the guy who stepped up for us in Joe’s Absence, he was the key guy.” -Tim Cone
With the takeover of CTC as head coach of the team this season, the Barangay Ginebra are expected
to end their eight year title drought. Unfortunately, the team failed to do so in the AFC after the
controversial loss and quarterfinal exit against the GlobalPort Batang Pier. But they still have 2 conferences to lived up the expectations or else, another failed season. Let us examine what are they
need to do to finally take home the trophy this season.

a. Scottie Thompson – The very promising rookie out of the Perpetual Help Atlas had make an impression last conference.  He is an all around player and is a very energetic player. He could be the new spark off the bench for Ginebra. Scottie will fill the statsheet every game if given a chance. Based on P.E.R., Thompson is a very efficient player.

b. Nico Salva – Salva had a great collegiate career from Ateneo and we know what he can do inside the court if given a chance. CTC can develop this guy into something special. He can provide some shooting and scoring for the team. He could be the today’s Sunday Salvacion or Mark Macapagal for Ginebra.

This is what I think the missing piece in Barangay Ginebra’s title quest. Chris Ellis hasn’t shown improvement on his offensive game. And I think its time for them to part with him. They can trade him for the likes of Rey Guevarra, Anthony Semerad or Ronald Pascual plus future picks.

Greg Slaughter is the only consistent contributor in Barangay Ginebra bigs and Japeth Aguilar should be the other one. If he will only be consistent together with Slaughter, they will be a force to reckon with every night. Japeth needs to do something with his game or else he would end up playing for another team.

4. SOL MERCADO should be the “SIXTH MAN” 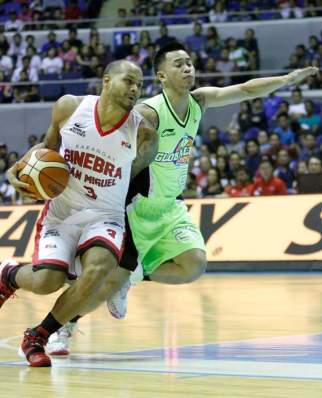 Sol Mercado is a combo guard so he can be the reliever of either L.A. Tenorio or Mark Caguioa. I see him as a great team leader that could guide this team to the championship. You can see the “Never Say Die” spirit on him. If he can average atleast 13 points and 5 assists a game off the bench, Ginebra will be back to the Finals.

5. JOE DEVANCE and JERVY CRUZ should be the “TWIN TOWER’S RELIEVER”

Joe Devance and Jervy Cruz need to provide some scoring off the bench. They should be the reliever of Japeth Aguilar and Greg Slaughter. If this two will be consistent and will contribute every game together with Slaughter and Aguilar, Ginebra would be unstoppable.