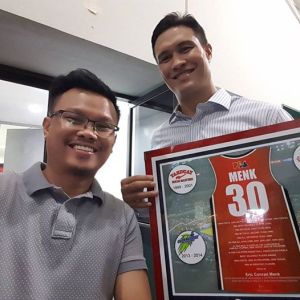 Pow Salud with Mr. ‘Major Pain’ Erik Menk
Eric Conrad Menk, a member of the PBA’s 40 Greatest Players, has officially retired after 16 seasons in the PBA.
Menk, known as the Major Pain last played for the Alaska Aces of the Philippine Basketball Association (PBA). He was a four-time PBA champion and was the 2004–2005 PBA Most Valuable Player.
Menk had played for the Barangay Ginebra franchise for 12 seasons where he won all his four titles before being waived and signed by the San Miguel Beermen of the ASEAN Basketball League. He was eventually picked up by the Alaska Aces of the PBA, playing for them for two seasons before being waived again.
Menk officially retired during the half time of the Alaska Aces and Baranggay Ginebra game where the Aces gave him a special tribute  by holding a retirement ceremony on Sunday May 7 at Smart Araneta Coliseum.

“Thank you so much. A lot of people to thank. The first thing I want to say is I’m just very blessed to play in the PBA for as long as I have, and for the teams and the people that I’ve played with and I’ve played for, I’m very, very thankful,” the retired professional player said at the center court”

“I want to thank Alaska for putting this thing together. It’s good to see all the Ginebra fans. I haven’t played for them for five years but the response I’ve gotten the last few days from many of their fans and former teammates and former coaches has been overwhelming,” Menk added. “All I can say is thank you. It’s been a dream come true to play as long as I have, to play in front of you guys. Thank you very much.”

The emotional 6-foot-6 Menk was joined by his family on the floor along with Jimmy Alapag, Harvey Carey, Mark Caguioa, JayJay Helterbrand, Danny Seigle and the entire Alaska squad.
Toggle Sidebar