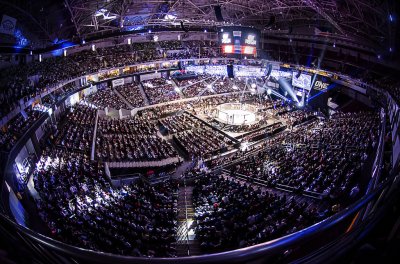 With ONE Championship returning to Manila, Philippines on 21 April, Asia’s largest mixed martial arts (MMA) organization seeks to electrify the 20,000-seater SM Mall of Asia Arena once again.
Company chairman Chatri Sityodtong revealed that ONE Championship is preparing a blockbuster event for its tenth venture on Philippine shores.
“April 21st in Manila is going to be a massive, massive event. We are going to have a crazy card for the fans in the Philippines. You’ve got to come out and show your love. We’re going to see some fireworks. It will probably be our biggest event in the Philippines,” he stated,
Sityodtong confirmed that Filipino fighter Eduard Folayang will be defending the ONE Lightweight World Championship title for the first time against a yet-to-be-determined opponent in the main event.
Last November, the 33-year-old Baguio City native pulled off an upset victory over Shinya Aoki to become an MMA world champion after nine years of competing in the sport.
Folayang dethroned Aoki by way of third-round technical knockout, driving a hard knee to the head before unleashing a barrage of punches to coerce referee Yuji Shimada to wave it off.
“In order to become a legend, you have to beat a legend. He did that despite being dominated by Shinya Aoki in the first round. Eduard Folayang showed what it’s like to conquer the odds,” Sityodtong said of Folayang’s stunning victory over Aoki.
“He is going to defend it in his home country for the first time. I want the entire country, if you’re a Filipino or have a Pinoy heart, you’ve got to watch this fight,” he added.
Aside from Folayang, Sityodtong also confided that Ben Askren will make the third defense of his ONE Welterweight World Championship belt in the Philippines.
Widely regarded as one of the best welterweight MMA fighters in the world today, Askren is no stranger to fighting on Philippine soil as he already fought twice in the country.
Askren is coming off a unanimous decision triumph over Russia’s Nikolay Aleksakhin in April of last year, keeping his unblemished MMA record intact.
As for Askren’s challenger in April, Sityodtong bared that an announcement will be made in the coming weeks.
According to Sityodtong, ONE Championship’s matchmakers are working really hard in filling up the bout lineup for its trip to the Philippines on 21 April.
“We’re definitely going to have some of the biggest Filipino superstars back. I hope to see the best and the brightest from the Philippines. I also hope to see Geje Eustaquio and Kevin Belingon,” he shared.
Although the promotion plans to further extend its reach across Asia, Sityodtong admitted that the Philippines remains one of ONE Championship’s key markets in the region.
“The Philippines is a very important market for us. I truly believe that ONE Championship can become mainstream where every single Filipino is enthralled with what ONE Championship has to offer,” he stated.
Sityodtong stressed that ONE Championship sets its sights in cultivating more homegrown talents from the Philippines.
“The Philippines is a nation of warriors. There are still a lot of talents coming out of the Philippines. It has a very rich history of martial arts. So we will see a lot of great things,” he ended.
​For more updates on ONE Championship, please visit www.onefc.com, follow on Twitter and Instagram @ONEChampionship, and like on Facebook at https://www.facebook.com/ONEChampionship.
About ONE Championship™
ONE Championship is the largest sports media property in Asian history. Headquartered in Singapore, the world’s most exciting mixed martial arts organization hosts the largest sports entertainment events across Asia featuring the best Asian mixed martial artists and world champions, all signed to exclusive contracts, on the largest media broadcast in Asia. ONE Championship is broadcast to over 1 billion viewers across 118+ countries around the world with some of the largest global broadcasters, including FOX Sports, Setanta, MNC, Astro, Thairath TV, ABS-CBN, TV5, MYTV, HTV, OSN and more.
Toggle Sidebar