Known as the High School Phenom from College of Saint Benilde and the Brother of Prince Rivero. Ricci entered the game late in the 3rd quarter and since then, La Salle took over the game and ended it with 75 to 66 victory.

The first 2 and a half quarter of the game was all NU with the help of their veterans, Matt Salem and JJ Alejandro. Their lead balloons to 9 points, midway of the 3rd quarter. Also helped NU is that Teng, Tratter and Mbala got into foul trouble.

But since the Ricci’s entrance, it seems La Salle already knew the formula for NU. They turned into their small line up with Ricci Rivero, Kib Montalbo, Thomas Torres, Andrei Caracut and Ben Mbala. 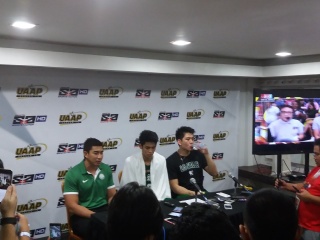 It was all La Salle in the 4th quarter as Teng, Mbala and Tratter took over the game.

Teng finishes with 23 points, 2 rebounds and 3 assists while his compatriot, Ben Mbala finished the game with 16 points and and 15 rebounds for La Salle. NU was led by Matt Salem and JJ Alejandro with 15 and 14 markers apiece.