Skip to content
Allen Iverson at age 42 is currently playing 3×3 basketball under Big 3 league by Ice Cube. The Big 3 League features well known retired basketball players from the NBA and while it is not as competitive as the NBA, it definitely can attract fans.
Allen Iverson, in one of the press conferences recently talked about who his favorite player is and what he feels about working for a management role in an NBA team.
The Answer is back and he is looking good with his shooting form, except he probably needs to work on his cardio.
The the Big 3 Season basketball tournament of Ice Cube is coming real soon and we are talking about practice.
Check out Allen Iverson as he shoots long shots after another.
With his stellar 14-year NBA career and at 40 years old, Carter hasn’t discussed plans to retire after the 2016-17 season. He’s even making a name for himself in the last couple of weeks and now he has reached a milestone and continues to make history by surpassing Allen Iverson for 23rd All Time on the NBA’s scoring list and 28th on the Pro Basketball scoring list.

The Naismith Memorial Basketball Hall of Fame will welcome three new members on Friday at the Induction Ceremony in Springfield, Massachusetts. The ceremony will begin at 6:30 pm ET and it will be aired live on NBA TV.

The presenters are as follows: 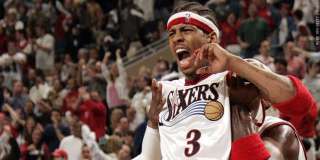 The Last #1 Pick We Had In Philly @philadelphia76ers . The City Needed This. 🙏🏾 by esqfowlkes
via Instagram http://ift.tt/207SNep

Retired Philadelphia 76ers superstar Allen Iverson will reportedly be eligible for the Basketball Hall of Fame’s 2016 class.The last time Iverson suited up in the NBA was the 2009-10 season, when he returned to Philadelphia for 25 games after several years in Denver and brief stints in Detroit and Memphis. Hall of Fame candidates have to be retired for five full years before they can be enshrined.

He only officially retired in October 2013, but since Iverson has been removed from the NBA long enough, Saturday’s news has him on an expedited track to Springfield, Massachusetts.

Iverson won the league MVP award in 2001 when he averaged 31.1 points and then put up 32.9 points per contest in the playoffs, guiding the Sixers to the NBA Finals. Although the team lost to the Los Angeles Lakers, Iverson helped his underdog squad steal Game 1 with 48 points. His performance was highlighted by an iconic moment in which he stepped over Los Angeles Lakers point guard Tyronn Lue after hitting a key jump shot in overtime.

Cleveland Cavaliers superstar LeBron James has spoken of how he idolized Iverson before making his own mark in the Association, comparing Iverson’s impact to that of Michael Jordan’s.

“Pound-for-pound, probably the greatest player who ever played. He was one of the greatest finishers we’ve ever seen. You could never question his heart. Ever. He gave it his all. A.I. was like my second-favorite player growing up, after MJ.” said James of Iverson.”

While accepting the Game Changer Award at the National Basketball Players Association’s inaugural Players’ Awards, Iverson began his speech with a sign of respect for MJ, perhaps the most famous victim of his lethal crossover.
“If it wasn’t for him, I wouldn’t be on this stage,” Iverson said. “I wouldn’t have had the vision to be a basketball player. So I love him for that, and I honor him for that.”
He later went on to shout out LeBron James, Carmelo Anthony, Kevin Durant, Stephen Curry and Chris Paul, five of today’s premier players.
Iverson’s moving speech transitioned from the court to the world, and he said that each day is the “same fight, different round
“When I leave out of the crib every day, people always say to me, “What up, AI?’” Iverson said. “I tell them the same thing 99.9 percent of the time. I tell them, ‘the same fight, different round.’ This world is a world title fight. Some days you’re going to get knocked down. Some rounds are going to be good. Some are going to be bad. The only thing that matters is getting back up and fighting again.”

Photo from NBA TV
Yes! This is a homer pick! I am a Big Steph Curry Lover! nothing wrong about that because he has made another history. I feel great about this simply because not like Iverson’s team, Curry’s team right now is different and even though Iverson faced a tougher challenge he didn’t back down even though they lost to LA Lakers. Curry will also attempt to beat another First NBA team since he has beaten his co first NBA team before getting to the finals. They beat Anthony Davis and the pelicans, Mark Gasol and the Grizzlies and James Harden of Houston Rockets. The only man left to beat is Lebron James.
I know Lebron is still the best player however Curry just like Iverson isn’t afraid to go after his goal.
Geez  I can’t wait for Thursday’s Game 1 .
That’s it for now, I know you guys can’t sleep either but don’t worry we will always be here to keep you guys updated and entertained.
powcast.net

The Answer, Allen Iverson and some NBA stars like Kevin Durant, Amare Stoudemire and Paul Pierce will watch the Pacquiao vs Marquez fight on November 12.  The following players could be set to play in a tournament that is hosted by the former NBA All-star and scoring champion Allen Iverson.
Iverson at age of 36 will be announcing the full line of the tournament that will take place at the Thomas and Mack Center in Las Vegas. According to news there will be four teams playing and the first game which is on the 12th of November will be earlier to make way for them to watch the Pacquiao vs Marquez  fight after the game.

Whats up with Turkish team Besiktas?
Allen Iverson, Deron Williams, Kobe Bryant, Kevin Durant these are some of the big names that the Turkish team allegedly wanted to sign. Wow! This team got a lot cash to sign big stars from NBA players.  Got some suggestion to you team Bekistas, when the NBA lock out is resolve why wont you just apply in the NBA and have your team added there, might be more profitable for you as well.

Just look at the photo from this press conference today, announcing Allen Iverson official signing a two-year deal with Besiktas Cola Turka in the Turkish league. (via Iverson’s site)

Does anyone look happy?

Iverson said he was happy to go, he has the chance now to be a basketball ambassador to the world. He’ll make $4 million in two years (he can opt out after one). The owners of Besiktas have to be thrilled as Iverson will be a draw, they should make money. This will be a big boost for the Turkish league, landing the first American real star to head overseas.

However, like Larry Brown and others had said, it’s sad to see it end up this way.

Iverson was an American basketball icon, but never one you pictured as an ambassador of the game. He was an MVP and the only offensive option — and enough of one — on a 2001 Sixers team that went to the finals. And he did it with his own style. The exaggerated crossover. The hip-hop style. He brought the game to the street. He was exciting to watch.

But he got older and could not adjust his game to the game anymore. And he was unwilling in Denver and Memphis and Philadelphia to fit in. He wouldn’t be the designated scorer off the bench, which is where his game is.

So he’s in Turkey. And this could be good for everyone. He could be a basketball ambassador.

If Iverson accepts the role this time.

Iverson played 25 games with the Philadelphia 76ers last season averaging 13.9 points but was unable to secure an offer from an NBA team this season.

“I’m at the point in my career where mentally and physically I know I can play basketball and that’s what I want to do. If I can’t play in the NBA, but I want to play basketball, that’s a decision I have to make,” Iverson told reporters in New York.

“My whole thing was being wanted and being accepted by a ball club. That was the most important thing to me: to be wanted.”

The deal is set to earn Iverson, who is 17th on the NBA’s career scoring list with 24,368 points and winner of the MVP award in 2001 when he led the Sixers to the finals, $4 million.

Iverson, 35, enjoyed his best years with Philadelphia but also had spells with the Denver Nuggets, Detroit Pistons and Memphis Grizzlies.

Iverson, 35, should make his debut for Besiktas on November 20.

“It’s the fact that I want to play and contribute what I can give to a basketball team,” Iverson said. 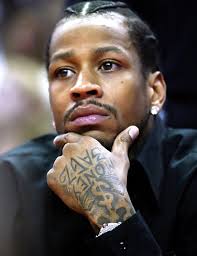 Iverson, who is getting no interest from NBA teams, was contacted by a Chinese team last month, says his agent Gary Moore. Moore declined to name the team or provide more details.

The 35-year-old Iverson is at the tail end of his career and isn’t getting any calls from the NBA which opens training camps in two weeks.

“We’re very astonished, to say the least, that not one team has contacted us with any interest,” Moore said. “I just don’t understand it.”

If Iverson heads to China he would follow former all-star Stephon Marbury who played last season for Shanxi Zhongyu of the Chinese Basketball Association.