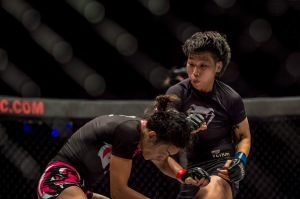 20 January 2018 – Jakarta, Indonesia: The largest global sports media property in Asian history, ONE Championship™ (ONE), electrified the Jakarta Convention Center once again last Saturday night at ONE: KINGS OF COURAGE. The first ONE Championship live event in 2018 kicked the year off in style, as the absolute best in local and international martial arts talent took to the ONE Championship cage. In the main event, “The Panda” Xiong Jing Nan of China was crowned the inaugural ONE Women’s Strawweight World Champion with a technical knockout victory
over Singapore’s Tiffany Teo.
Visit the official ONE: KINGS OF COURAGE photo gallery by clicking: http://bit.ly/onephotos

In the main event of the evening, a riveting striking battle took place between two outstanding female martial artists. “The Panda” Xiong Jing Nan etched her name in the pages of history as the first ever ONE Women’s Strawweight World Champion, defeating Singaporean martial arts ace Tiffany Teo by referee stoppage in the fourth round. Relying on her accurate striking, Xiong tagged Teo repeatedly with her patented overhand rights and stinging left hooks that presented a difficult problem to solve for the tough Singaporean. Through sheer power and determination, Xiong overwhelmed her opponent and secured the finish by dropping Teo with a volley of crisp punches, prompting veteran referee Olivier Coste to call a halt to the contest.
Xiong Jing Nan, newly-crowned ONE Women’s Strawweight World Champion, stated: “I want to thank ONE Championship for this chance to show what China, and what women can do. I am happy to represent China and take a lot of pride in that. I feel great and I’m overwhelmed. This is a message to all the women across the world, you can achieve anything. This win is dedicated to my grandmother and grandfather who passed away recently.”

In the co-main event of the evening, Indonesian flyweight prodigy Stefer Rahardian drew the loudest cheers from the hometown crowd at the packed Jakarta Convention Center as he turned in another stellar performance, dominating Pakistan’s Muhammad Imran over three rounds to keep his unblemished professional record intact. Rahardian fully utilized his grinding ground-and-pound to pummel Imran repeatedly while threatening to end matters with various submission attempts. All three judges scored the bout in favor of Rahardian, who had his arm raised via unanimous decision.

In an entertaining display of grappling mastery between two submission wizards, former ONE Lightweight World Champion Shinya “Tobikan Judan” Aoki emerged triumphant against former ONE Featherweight World Champion Marat “Cobra Gafurov in the card’s highly-anticipated Grappling Super-Match. Tearing a page out of his opponent’s playbook, Aoki took Gafurov’s back and submitted the Russian with a tight rear-naked choke to earn a much-needed victory.
Indonesian martial arts standout “The Terminator” Sunoto returned to action, needing only two rounds to pull off a crafty submission finish against Cambodia’s Rin Saroth. Facing an opponent who has extensive experience in the striking discipline of khun khmer, Sunoto turned the bout to his advantage by taking Saroth down to the canvas and wearing him out with stifling ground strikes. On the mat, Sunoto caught his Cambodian counterpart with a deep americana to force the tap, claiming the third submission win of his professional career.
32-year-old Russian bantamweight standout Yusup “Maestro” Saadulaev spoiled the ONE Championship return of Japanese veteran martial artist Masakazu Imanari, stifling his opponent with his high-level grappling game. The Brazilian jiu-jitsu black belt kept the action focused primarily on the mat, where he controlled the pace in various dominant positions while constantly threatening with submission attempts. All three judges scored in favor of Saadulaev to win by unanimous decision.
36-year-old Indonesian martial arts proponent Victorio Senduk made a successful return to the ONE Championship cage after a four-year break to defeat countryman Yohan Mulia Legowo via thrilling technical knockout. After overcoming Legowo’s offensive advances early in the bout, Senduk came back with a dramatic display of willpower to turn the tables on Legowo, blasting him with a devastating combination against the fence just moments into the second round.
Filipino martial arts veteran Rene Catalan of Manila, Philippines turned in one of his most dominant performances to date against China’s Peng Xue Wen, winning by technical knockout to score his fourth straight victory inside the ONE Championship cage. Catalan, 18 years Peng’s senior, dominated the striking exchanges and matched Peng, a Greco Roman wrestling champion, in the grappling department. In the second round, Catalan dropped Peng with a liver shot and swarmed him on the ground.
Local female martial artist Priscilla Hertati Lumbangaol made easy work of Malaysia’s Audreylaura Boniface with a spectacular showcase of offense. A wushu and sanda practitioner, Lumbangaol peppered Boniface with strikes for the duration of the bout, ending matters against the cage with a torrent of impactful combinations.
In a rousing one-round striking affair to kick off ONE: KINGS OF COURAGE, Riska Umar of Indonesia overcame a spirited effort from countryman Egi Rozten to win via technical knockout. Rozten came out of the gates looking to end matters early with a relentless barrage of strikes, but Umar kept his composure and weathered the storm to win with ground-and-pound at the
4:20 mark of round one.
Official results for ONE: KINGS OF COURAGE ONE Women’s Strawweight World Championship bout: