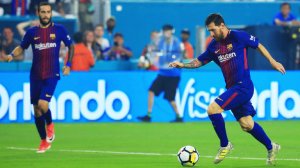 A Score And Assist From Lionel Messi

SANTIAGO BERNABEU – An early Christmas gift from FC Barcelona to their fans as they won 3-0 against the La Liga defending champions, Real Madrid. It is only December but Los Blanco’s hopes of a back-to-back champion may be gone as they lost in the first El Clasico of the season.

During the first half, both teams have equal chances on scoring and an almost the same possession statistics. Both teams didn’t score as the first half ends.
Luis Suarez opened the scoring and Sergio Roberto getting the assist. Dani Cavajal was sent off by the referee because of intentionally blocking the ball using his hands in the penalty area. Lionel Messi takes the penalty shot and scored on the 64th minute. Both teams were tired so Zinedine Zidane substituted Gareth Bale in and almost scored after a powerful shot outside the box. The crowd thought that it ends already in a 2-0 score but on the 93rd minute, Aleix Vidal scores after a pass from Leo Messi.
FC Barcelona is still unbeaten in this season with a 45 points and above the table. They are 9 points above the second team, Atletico Madrid. For the first time, Barca has won three straight league matches at Real Madrid.
Real Madrid’s devastating loss in El Clasico means that they should triple their effort. Next year (2018) will be a challenging year for them because of the fast-approaching UEFA Champions League Round of 16 and the title defense is still on. A miracle is needed for Los Blancos to retain their La Liga crown.
Toggle Sidebar