Bittersweet, this is exactly what I felt after the loss of the Philippine National Soccer team (Azkals) to Kuwait last July 28 at the Rizal Stadium in Manila.
Azkals have given Filipino Football fans with more than what was expected of them and their recent accomplishments are already unmatched and unheard of in the history of football in the Philippines.
Get updates straight from your browser download POWCAST.NET toolbar now
Follow us on Twitter | Like us on Facebook

They left Filipino fans salivating for more and dreaming of moving forward to the 2014 FIFA World Cup . The game with Kuwait for most football analyst is a given as Kuwait football team is much more superior that you can almost expect a beating. which exactly what happen in their first game in Kuwait as they were swallowed with a 3 – 0 score and the same result on the second game 2 -1 in favor of the Kuwait Football team.

So Why do we still support them?
Whats next for the Azkals?
Azkaleros
Celebrate
Wave goodbye and Thanks after the lost to Kuwait
Is the Azkals fever dead? 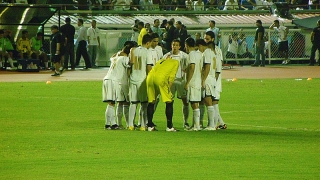 Kuwait show why they are higher in ranking compare to the Philippines. Kuwait won the match with a three to nothing score. Kuwait will visit Manila this July 28 for the 2nd leg of the 2014 Brazil  FIFA World Cup qualifier. Azkals need to win this badly to keep their hopes alive.  Kuwait vs Philippine Azkals Video highlights.