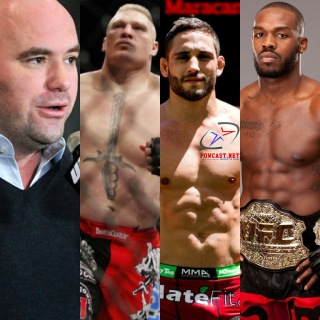 On June 2015, UFC and USADA started the new drug testing program and eversince it was implemented many fighters have failed.

The latest who received suspension for Doping Violation was Chad Mendes. The featherweight contender tested positive for GHRP-6. UFC removed him from Featherweight Rankings.

A temporary suspension for Jon Jones was handed by the Nevada State Athletic Commission until the commission can have a full hearing which will likely happen in September or October. The former light heavyweight champion who is considered one of the greatests in the sport tested positive for clomiphene. Disappoints me much as a fan.

Another one who tested positive for hydroxyl-clomiphene was Brock Lesnar. He may face a maximum two-year suspension from UFC competition but not from WWE because Lesnar is classified as a part-time athlete and thus he’s not subjected to the company’s talent wellness program.

Former UFC lightweight and welterweight champion B.J.Penn has been suspended by USADA for six months due to out-of-competition IV use. Penn was pulled out of UFC 199 bout with Cole Miller.

UFC lightweight Islam Makhachev tested positive for the Meldonium. Makhachev underwent a radiofrequency ablation procedure in December 2014 and physician recommended to incorporate it into his follow-up treatment. The fighter discontinued use because he was aware that the substance would be prohibited. USADA ruled Makhachev with a ‘No Fault’ for his Meldonium.

George Sullivan voluntarily disclosed information that could pose a potential compliance issue with the Anti-Doping Policy. Sullivan has been removed from his fight with Hector Urbina from the UFC on Fox 20 card.

Yoel Romero tested positive for performance-enhancing drugs (PEDs). He was removed out of UFC Rankings. Romero was former No. 2 Middleweight contender.

Machida has been flagged by USADA and admitted the use of 7-Keto DHEA on his pre-fight. He claims he had no idea it was on the banned substances list.

NSAC suspended welterweight Nick Diaz for five years because of the third marijuana-related offense of his career. Diego Brandao also has tested positive for marijuana at UFC 195. 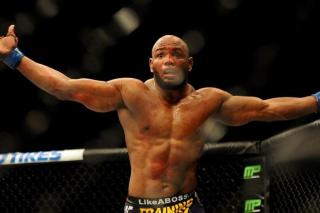 Yoel Romero didn’t just earn the biggest win of his career Saturday night. He made some dough, too. A hard earned $50,000 was given to “the soldier of God” as a performance of the night bonus after giving Lyoto “The Dragon” Machida old school ground and pound TKO at the main event in UFC Fight Night 70 in Hollywood, Fla.

Other fighters Lorenz Larkin and Santiago Ponzinibbio are also $50,000 richer for there fight of the night bouts and  Thiago Santos picked up the other Performance of the Night bonus with his stunning, 34-second head kick knockout of Steve Bosse.

Cuban middleweight contender Yoel Romero made an emphatic case for a future shot at the 185-pound crown Saturday, knocking out former world champion Lyoto Machida in the third round of the UFC Fight Night main event at the Seminole Hard Rock Hotel and Casino for his tenth and most important pro win.

Despite fans chanting for Lyoto Machida, Romero proved them all wrong by showcasing supreme athleticism. Machida opened with his fast kicks utilizing it very well in the first round but Romero was wise enough to close in the distance and was able to land a haymaker of his own making Machida caught off balance.

Second round Machida was able to keep romero at bay with long range kicks, while “the soldier of god” keeps on stalking until he landed some hard punches upstairs. In the second minute of the third round, the kinetic chess match ended in an instant, Romero taking Machida to the mat suddenly and following up with a flush set of elbows that brought in referee John McCarthy to step in and halt the bout at 1:38 of the frame.

With the win, the number six-ranked Romero moves to 10-1; the number four-ranked Machida, 37, falls to 22-7. The loss was Machida’s second straight, following an April submission defeat against Luke Rockhold.

After a devastating loss to Luke Rockhold on UFN last April 18, 2015 Lyoto aims to bounce back and claim victor on this fight to retain his current 3rd ranking. Yoel “Soldier of God” Romero however is been on a 4 consecutive winning streak since November 6, 2013 and is determined to keep the ball rolling. Both men are determined to win on this clash. Who will reign victorious?

Stay tune for more updates on this fight in http://www.powcast.net

Never Back Down 2 – The Beatdown – Official Movie Trailer