Don King is one of boxing’s most famous icons, not only for his flamboyant personality but also because of the unforgettable boxing matches that he’s promoted.

He promoted the legendary Muhammad Ali vs Joe Frazier match called the “Thrilla in Manila” in 1975.

Now, the 76-year-old King is visible again in the boxing arena.

“I love the Philippines and Imelda Marcos is still alive. God bless you Imelda, I love you Imelda. I am looking forward to dancing with you again, love to all the people in the Philippines, the Thrilla in Manila is immortalized,” he said.

King was one of the promoters of the Cotto-Mayorga “Relentless” fight held at the MGM Grand in Las Vegas, Nevada. King partnered with Top Rank CEO Bob Arum.

When asked if the Mayweather-Pacquiao bout will ever take place, King said: “I’m working on Floyd Mayweather too. We are gonna start the pandemonium… it’s gonna be a super sensation.”

Arum didn’t deny that he, too, wants to see a Mayweather-Pacquiao bout. Both King and Arum are waiting for Mayweather Jr.

Arum said, “When Floyd is ready, then we get the fight on. I don’t know if it’s gonna happen this year, I only have one part of the equation and that’s Manny Pacquiao. I know Manny would like it to happen this year. It takes two to fight.”

King said the fight of the century could happen since he is convincing Floyd Mayweather Jr. to make it happen. Most boxers in the welterweight division would want to fight the Pacman for the money and the fame.

Bookmark my site and write your comments below!

By: Pow Salud
The Nicaraguan boxer isn’t talking much now after losing to Miguel Cotto.
Before and during the match you will notice that the ever colourful and intimidating Nicaraguan boxer always finds his ways to bully and taunt his opponents, his antics and trash talking create some hype and makes the fight a little more interesting.
This type of act will land him a promotional job after his boxing stint but could not win him the fight. He is much like his promoter Don King who was never shy and never at loss of words.
Mayorga has always been like this, but this time his opponent Miguel Cotto does not really talk back, instead Miguel Cotto proved himself inside the ring by focusing on the fight and winning it.
Miguel Cotto the champion from Puerto Rico proves to all the boxing fans out there that his focus and composure won him the fight and that Ricardo Mayorga is a no better man.
Just like the name of the event, the fight was relentless and entertaining, personally I did not except the fight to go as far as 12 rounds but to my surprise both fighters are still slugging it out until the last few minutes of the 12 rounds.
During this time the fight looks like it can still go both ways until Cotto connected with a solid punch and Mayorga appeared to have injured his hand which knocked him down to his knee. This was a clear knock down, but the proud Mayorga refused to give up and tried to shrug it off.
He continues with the fight but Miguel Cotto never stopped the attack until Ricardo Mayorga couldn’t take it anymore and was forced to surrender.
Kudos to Ricardo Mayorga for putting up a good fight but this loss will hurt the most than the injury that he might have had gotten.
The night and a moment that belonged to Miguel Cotto who has not only retained the championship belt but also proved to himself that he still got what it takes to win consecutive fights and to be a top man in boxing.
Watch the replay here: http://www.powcast.net/2011/03/miguel-cotto-vs-ricardo-mayorga-full.html
Click here to go home»

Bookmark my site and write your comments below! 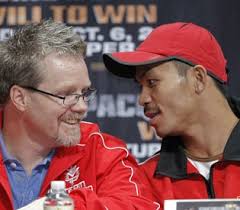 Freddie Roach yesterday predicted the Pacquiao knocking out Antonio Margarito in their clash on Nov. 13 in a place yet to be identified as the Mexican-American has yet to obtain a license to box in the United States as a result of his suspension for playing with tampered handwraps against Shane Mosley last year.

And on Wednesday, Margarito was denied a license to fight in California by the state’s athletic commission, leaving him to ponder options for a planned fight against Pacquiao.

Barry Horn of the Dallas Morning News, however, reported Margarito wasted no time in applying for a license to fight in Texas to push through with his plan to contest the World Boxing Council Superwelterweight crown against Pacquiao at the Dallas Cowboys Stadium, where Pacquiao had proven his star as a top ticket seller.

According to Horn, the Texas Department of Licensing and Regulation has received a faxed application from Margarito, department spokeswoman Susan Stanford said Thursday, with Margarito receiving support from the National Association of Boxing Commissions.

“He is now free to pursue licensure with any ABC member commission. There is nothing under the federal law that would prohibit consideration for licensure,” the ABC was quoted by Horn as saying.

Margarito’s fall was caused by an enforcement of suspension by the California State Athletic Commission, which found him with padded handwraps when he was about to face Shane Mosley, which beat him on January 24, 2009 at the Staples Center in Los Angeles.

While Pacquiao’s camp is waiting, Brad Cooney of the examiner.com reported Roach’s prediction, saying: “ I am confident in my fighter (Pacquiao) and I do predict a knockout along the way.”

“Margarito is a big guy, so his size will be a little bit difficult. Is he a big puncher? We will see. I will be watching his hand wrapping the whole entire time,” Roach added.

To make sure Pacquiao will not slcaken, Roach said he will be bringing in Julio Cezar Chavez to the Philippines to spar with Pacquiao.

“I am bringing Chavez with me to the Philippines to work with Manny Pacquiao. Chavez will spar with Manny and he will help us get Manny ready for this next fight. It will be good work for both of them.”

But Roach still has Floyd Mayweather in his radar as he did not discount the possibility of putting his ward and the American in one ring.

“I can’t believe that this fight isn’t happening,” said Roach. Maybe with Don King, something can get done. With him anything can happen.”

“We agreed to everything then (Mayweather’s demand for an Olympic-style drung testing). Mayweather said no negotiations were going on, and that busted in his face. That leaves one thing, Mayweather is scared to lose. I think ultimately the fight will happen,” Roach said. With reports from AFP

The much-requested fight between Manny Pacquiao and Floyd Mayweather, Jr. will have a tremendous impact on the world, legendary boxing promoter Don King predicted.

King, who is rumored to be taking part in the Pacquiao-Mayweather negotiations, said the super showdown would be “universal.”

“It would transcend earthly bounds,” he told Lem Satterfield of FanHouse.com.

“With what I have in mind for Floyd Mayweather-Manny Pacquiao, if I’m fortunate enough to be able to be a part of it and to be able to get Floyd, I’m looking at something that would be so stupendous that it would boggle the mind,” he added.

“It would be something that would bring billions of people together. It would be noted as a sporting event, but it would really be a humanitarian event,” King stated. “It would be somewhere where there would be fifteen hundred thousand people on the scene like we did with the Rumble in the Jungle.”

King was referring to the October 30, 1974 fight between Muhammad Ali and George Foreman which he promoted.

Ali knocked out Foreman in the 8th round of their 15-round bout in Zaire (now the Democratic Republic of Congo) to win the World Boxing Association (WBA) and World Boxing Council (WBC) heavyweight belts.

But before making more pronouncements on the Mayweather-Pacquiao clash, King reminded that he has yet to enter the picture.

“But if I get it then, you can ask me that question,” he told FanHouse.com. “But I would make it, what we call in the ghetto, something kind of wonderful. And I think that Bob Arum and I could put it together.”

Arum, who is Pacquiao’s promoter, already expressed optimism that the Pacquiao vs Mayweather fight could finally happen if King joins the negotiating table.

Negotiations for the Pacquiao-Mayweather bout fell apart twice. The boxing megastars were supposed to fight on March 13 and November 13.

On May 1, Mayweather scored a unanimous decision victory over Shane Mosley at the MGM Grand Garden Arena in Las Vegas, Nevada.

Pacquiao is slated to fight Mexican Antonio Margarito on November 13. – With a report from FanHouse.com
READ MORE…

The headlines have been working overtime for nearly two weeks. Veteran promoter Don King and Floyd Mayweather Jr. have been spending a lot of time together in Florida.

The headlines didn’t stop this weekend as Mayweather flew to St. Louis as King’s special ringside guest for Saturday’s Alexander-Kotelnik card. The 78-year-old King is attempting to become Mayweather’s negotiating partner for a third attempt to make a mega-fight with Manny Pacquiao.

Top Rank CEO Bob Arum, who promotes Pacquiao, made two attempts to finalize a deal for a Mayweather fight, and failed both times. King believes that he can make the fight with Arum, easily. Mayweather has worked with Golden Boy Promotions for his last four ring appearances. Top Rank and Golden Boy have a very strained relationship, which may or may not cripple any future Mayweather-Pacquiao negotiations.

“Me and Bob Arum can pull this Floyd Mayweather-Manny Pacquiao s**t off in two seconds, you know what I’m saying. I’m talking in two shakes of a lamb’s tail. It would be fitting and proper for Bob and I to work on this because we’re used to what it means,” King said.

Many industry insiders have wondered why Mayweather is entertaining the possibility of working with King instead of Golden Boy. According to King, Golden Boy Promotions have not shown Mayweather the proper respect in their four fight relationship. He says the promotional company never defends him in the media and simply view him as a piece of high-priced property.

“They [Golden Boy] don’t speak ghetto-ese like Floyd Mayweather does, do you understand? I mean, that’s like hieroglyphics to them. So they may talk to the man like they’re talking down to the man. Talking around the man. Or looking at the man in a condescending manner, you know what I mean? They look at him like he’s an indentured servant when in actuality he’s the hottest thing on the planet,” King said.

“Floyd Mayweather has the ability to self-promote to the point where they would offer him $40 million. But if he was with me, it would be $100 million. That’s the difference. In addition, he would keep his dignity and his pride intact. They [Golden Boy] treat him like he’s a cow or a horse, and like he’s property. But you’ve got to get that s**t out the way.”
READ MORE…