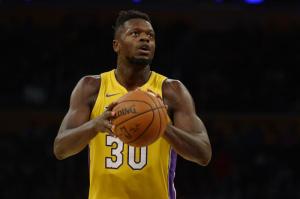 The trade was initially discussed but didn’t materialize.

Julius Randle’s name has been in numerous trade rumors even before the start of the regular season. This is due to the fact that according to the insiders from the Los Angeles Lakers, Randle has already grown unhappy with his new role with the team- a player who used to be a starter in the past, now a player who is coming off the bench this season.
While Randle has been successful in his new role despite only playing 22 minutes per game on the average, he already indicated in numerous interviews that he doesn’t have the choice but to embrace his new role as a bench player who is also averaging 12 points, 6 rebounds and close to 2 assists per game this season. He’s the sixth-leading scorer of the Lakers.
There were many rumors in which Julius Randle’s name is included. While none of those trades materialized, some of those are pretty much interesting. Among the trade rumors that were apparently entertained by the Lakers was the one that would have sent Randle to the Dallas Mavericks in exchange for Nerleans Noel.

If the trade happened or is to happen before the trade deadline, who would benefit more?

Julius Randle would have benefited from the trade because he would have been teaming up with Dirk Nowitzki by now. The Mavericks would have gained a young power forward who can slide down to the small forward spot at times. Adding Randle into the mix would have added 3 wins in the projected number of wins for Dallas.
On the other side of the court, Nerleans Noel, a player whose career has been ruined by numerous injuries, can benefit from this change of scenery for one good reason: his playing minutes have dropped this season as he’s only logging in 12 minutes per game- a career low for him. While the Lakers’ projected number of wins is decreased by 3 wins, this trade will benefit them in the long run especially if Noel manages to finally stay out of injury.

While the trade hasn’t materialized, it’s almost certain that Julius Randle will be one of the Lakers who are likely to be traded before the trade deadline in February. Where will he be playing next? The possibilities are unlimited. Who knows? He might end up playing for a championship-contending team.

It has been a shocking news for Oklahoma City Thunder Fans, after Kevin Durant joined the bandwagon and left them just to join the powerhouse Golden State Warriors. The Warriors now, are much more lethal as a contender than before. The Big 5 for the Warriors consists of Stephen Curry, Klay Thompson, Andre Iguodala, Draymond Green and of course.. Durant.

The fans were not happy with what happened and were disappointed with Durant’s decision.

Here are some of what I found about fans reacting on Durant’s Instagram: 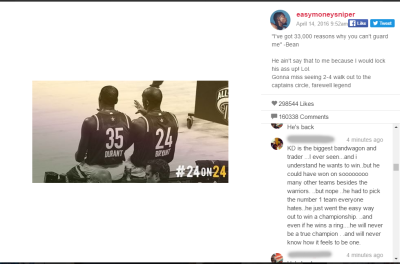 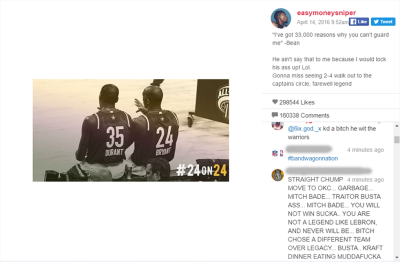 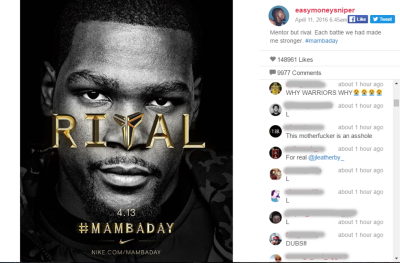 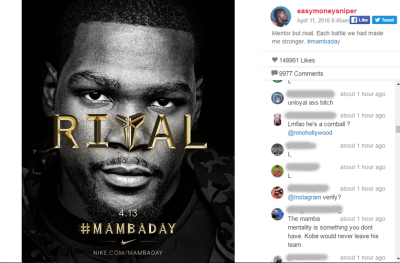 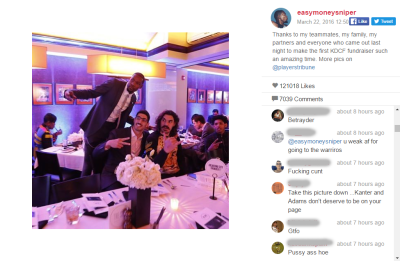 Here is Durant’s essay posted on The Players Tribune. A message on ending his 9-year stint with the Oklahoma City Thunder.

Kevin Durant in his own words. pic.twitter.com/BrwNz0F326

//platform.twitter.com/widgets.jsAfter all, it is still Durant’s decision. We couldn’t blame him for leaving, but it is unfair to go to a team who has a lot of star players in their prime and lastly, going to a team who just eliminated them last playoffs just to win a championship, is much worse than not winning a ring. 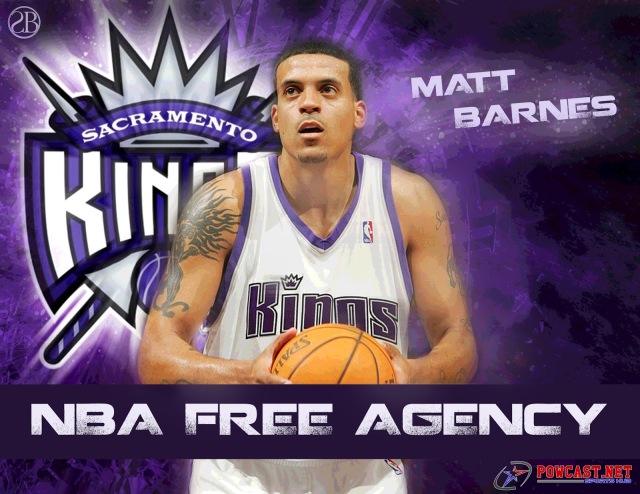 (Artwork by Sean Curate)
Matt Barnes has reunited with the Sacramento Kings, after signing a contract worth $12 million for a two-year deal, sources told ESPN’s Marc Stein.
Barnes played for the Kings during the 2004-05 season, but was traded halfway through the season to the Philadelphia 76ers, but hasn’t played due to knee tendinitis. He was later waived by the 76ers.
Barnes then went to different teams. Signed with the Knicks in 2005-06 offseason, waived after playing six games. Went to 76ers again to serve a second stint, until he finished out the season.
Signed with the Golden State Warriors for two years 2006-08, where he averaged 9.8 and 6.7 points per game, his highest ppg during that time of his career.
Went to Phoenix and played with the Suns for one year. He improved since he was traded to the Suns after playing with the Warriors for two years, averaging 10.2 points per game.
After a year with the Suns, he went to Orlando for one season. Averaging 8.8 points per game, until he was traded again to another team.
Barnes then signed with the L.A. Lakers, spent two seasons as a role player, he averaged 6.7 and 7.8 points in Lakers uniform.
He was traded again and landed to the Clippers, he spent three years and had his career-highs with the Clippers. He was consistent throughout his stint with them, after averaging 10.3, 9.9 and 10.1 points for three seasons.
Last season, he played for the Grizzlies and averaged 8.3 points per game.
The Kings brought back Barnes due to his defensive toughness on the perimeter and size. Which they lacked throughout the past seasons. 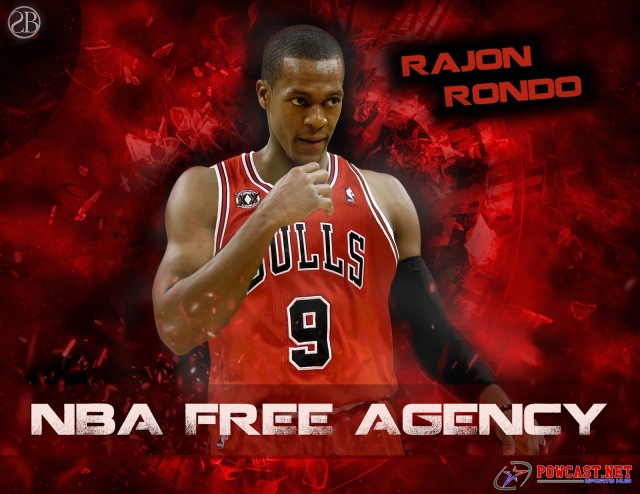 (Artwork by Sean Curate)
After the departure of Derrick Rose from the Chicago Bulls. The Bulls’ roster has opened up a huge hole for the starting point guard spot. That’s why they are on the move to scout elite point guards in the league. One of the Bulls’ main target right now is Rajon Rondo.
Rondo has already met with the Bulls in a free-agent meeting Friday in Chicago, sources told ESPN’s Marc Stein and Marc J. Spears.
The Sacramento Kings point guard averaged 11.7 per game last season. He also led the NBA in assists total, making him a double-double guy.
If this trade happens, it would be nice for us to see a new back court duo emerge in Rajon Rondo and Jimmy Butler.
This would definitely be a great move for the Bulls. The best is yet to come in Windy city.

At around 1:45 a.m. Friday (Times Eastern), the Heat reportedly ended their meeting with Whiteside without an agreement in place. He met with the Mavericks after that. (Shams Charania, The Vertical)

But the rumors about him leaving will now stop.

Just a few hours ago, Hassan Whiteside ended the buzz for the teams that are aiming to acquire him.

He finally made a decision after he announced his plans on Snapchat, making a post with the message “#Heatnation it is” over the top.

Hassan Whiteside announces on The Players’ Tribune and Snapchat that he’s staying in Miami. pic.twitter.com/6q1T4Zws3n

//platform.twitter.com/widgets.js
So for Heat Fans. Chill. He is Staying with the Miami Heat.

The Los Angeles Lakers are going All out in pursuing free agents this offseason. There are a lot of talents in mind that they’re aiming to acquire before the NBA Season starts.

The Primary Objective is to land Oklahoma City Thunder superstar Kevin Durant to the Lakers. Durant has been one of the hottest topics in Free Agency this year. It has been reported that the 27-year-old small forward has already talked to different teams, but the Lakers were not among the list.

But aside from Durant. The Lakers have also been eyeing on some players like Hassan Whiteside, Al Horford, Nicolas Batum and Harrison Barnes.

It is still unclear if they’ll get one from the list, but we’re hoping and still waiting for the Lakers to make their move. 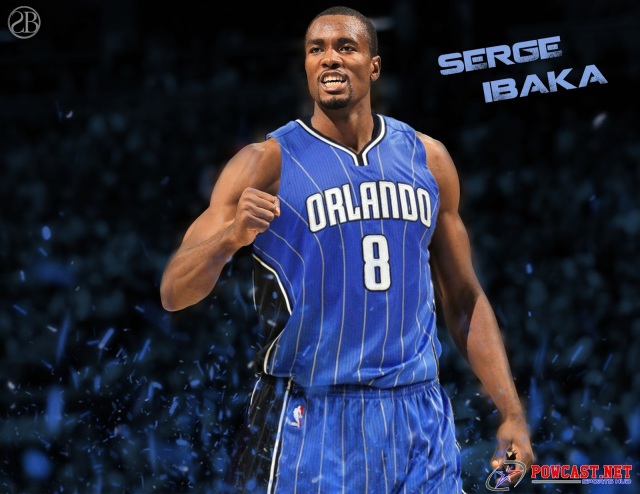 Ibaka was a great fit for the Thunder, because of the threat he imposes to the paint. He was a consistent shot blocker after averaging 1 block in 16 minutes of action in his early years in the league.

He was a Starter in the Thunder’s rotation, had career-highs in OKC with 21 points and 22 rebounds last February 2015.

But all things must come to an end.

Ibaka was traded to Orlando Magic, after the Thunder management decided to let him go in exchange for Victor Oladipo, Ersan Ilyasova and 11th pick of the 2016 NBA Draft Domantas Sabonis.

The Oklahoma City Thunder have decided to let go of their defensive big man Serge Ibaka. The Thunder send Ibaka to the Orlando Magic for Victor Oladipo, Ersan Ilyasova and recently drafted Domantas Sabonis, the 11th overall pick in the 2016 NBA draft.

The Magic got a serviceable defensive big man in Serge Ibaka who can also knock down three point shots. Ibaka, a three-time NBA all defensive first team, averaged 12.6 points, 6.8 rebounds and 1.9 blocks, his lowest output since his third year in the league. With the resurgence of Steven Adams and Enes Kanter, Ibaka has fallen out of favor in the thunder’s rotation.

Meanwhile, the Thunder got a combo guard who can provide scoring aside from Kevin Durant (assuming that he is coming back as a Thunder next season) and Rusell Westbrook in Victor Oladipo and a proven stretch four in Ersan Ilyasova. Oladipo, the second overall pick of the 2013 NBA draft averaged 16 points, 4.8 rebounds and 3.9 assists in his third season in the NBA while Ilyasova will provide spacing and scoring off the bench for the Thunder.

The Thunder also got a diamond in Domantas Sabonis, the 11th overall pick of the 2016 NBA draft. Sabonis is the son of the legendary player Arvydas Sabonis. The 6’11 power forward has averaged double double of 17.6 points and 11.8 rebounds in his last year in Gonzaga as a sophomore. He has also a good shooting stroke, can knock down threes and perimeter jumpers. He is expected to have a hard time and fight for big man rotation with Ersan Ilyasova, Enes Kanter, Steven Adams and Mitch Mcgary.

The 2016 NBA draft was held on June 23, 2016, at Barclays Centef in Brooklyn with the Philadelphia 76ers picking first.