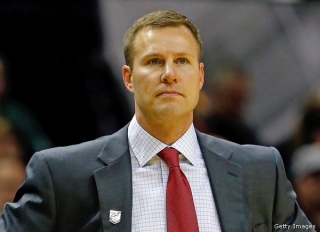 That’s Right its like Domino! The Chicago Bulls may have Fred Hoiberg as their head coach next season, Hoiberg will be replacing Tom Thibodeau, Fred has been in the waiting list to be the next Head Coach for the NBA for quite sometime and it is no secret that he will be the successor of Thibodeau if things would fall into place.

“Hoiberg’s deal is believed to be worth a total of $25 million, the New York Daily News reported.”

Hoiberg also had a stint as the Vice President of Basketball Operations in 2006 after announcing his retirement as a player. He is also the current coach of Iowa State University and has done wonders for the team.

* Led The Cyclones in 2014 to reach the Sweet 16, he also became the fastest coach in Iowa State history to notch 100 wins (in 148 games) on December 31, 2014, when Iowa State defeated Mississippi Valley State.

Hoiberg played for the Chicago Bulls for 4 seasons (1999-2003), He will be teaming up with an alma matter of the Bulls as well the Forman and Bulls executive vice president John Paxson.