Skip to content
Michael Bisping remains to be the middleweight champion of the world after beating the legend and future Hall of Famer Dan Henderson via unanimous decision. This is his 20th wins which made the most wins in UFC history. Bisping just passed Gorges St-Pierre’s record. But it was never an easy one. Hendo gave him massive punches that broke Bisping’s face. The Count escaped the finish in the first and second round. The UFC 204 was held on October 8, 2016 at the Manchester Arena in Manchester, England.

Gegard Mousasi extends his win-streak with a huge win against one of the scariest fighters Vitor Belfort who was reportedly retiring after this fight. Belfort was throwing combos countering Mousasi. In the second round, The Armenian Assassin kicked The Phenom in the head then finished him off with ground and pound.

Ovince Saint Preux lost to Jimi Manuwa. He was brutally knocked out by The Poster Boy’s left hook. This competition was important for both men to move on up the LHW rankings and avoid adding one more in their loss record. Manuwa bounced back from a KO loss to Anthony Johnson at UFC 191, while Jon Jones defeated OSP in their short-notice bout at UFC 197.

The Michael Bisping vs. Dan Henderson bout was awarded FOTN. While Jimi Manuwa and Iuri Alcantara both earned POTN.

Middleweight Michael Bisping (c) def. Dan Henderson by unanimous decision
Middleweight Gegard Mousasi def. Vitor Belfort by TKO at 2:43 in round 2
Light Heavyweight Jimi Manuwa def. Ovince Saint Preux by knockout at 2:38 in round 2
Heavyweight Stefan Struve def. Daniel Omielańczuk by submission (d’arce) at 1:41 in round 2
Featherweight Mirsad Bektic def. Russell Doane by submission (RNC) at 4:22 of round 1
Bantamweight Brad Pickett def. Iuri Alcântara by submission (triangle choke) at 1:59 of round 1
Bantamweight Damian Stasiak def. Davey Grant by submission (armbar) at 3:56 of round 3
Welterweight Leon Edwards def. Albert Tumenov by submission (RNC) at 3:01 of round 3
Lightweight Marc Diakiese def. Łukasz Sajewski by TKO at 4:40 of round 2
Welterweight Mike Perry def. Danny Roberts by KO (knee and punches) at 4:40 of round 3
Lightweight Leonardo Santos def. Adriano Martins by split decision in round 3 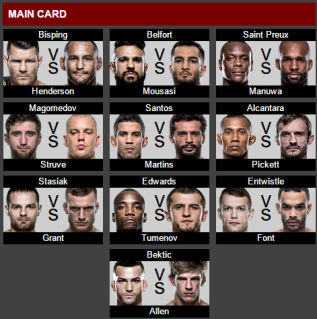 No. 13 Dan Henderson knocked out middleweight champion Michael Bisping at the historic UFC 100 in 2009. The Henderson vs. Bisping 2 is happening after seven years that will be held on October 8, 2016 at the Manchester Arena in Manchester, England.

Dan Henderson confirmed that he will be retiring after this fight in an interview three months ago.  “I probably should give more thought to it being my last fight than I do, because it is going to be the last time. I’m not emotional, I’m not anything about it, it’s just another fight. I was ready at the last fight to be done, but obviously I couldn’t turn down a title shot. My body could easily go another four or five years if I really wanted to.”

Vitor Belfort vs. Gegard Mousasi will headline the co-main event. Belfort lost to Ronaldo “Jacare” Souza at UFC 198. The main event fighters Bisping and Henderson were both knocked out by Belfort as well as the former middleweight champion Luke Rockhold in 2013. Mousasi came from a win against Thiago Santos and Thales Leites and will be looking to extend his win-streak this year.

Ovince Saint Preux and Jimi Manuwa to cross paths in the light heavyweight division. Meanwhile, the bantamweight bout between Entwistle and Rob Font was scrapped due to medical condition. Entwistle slipped in and out of consciousness during the weight cutting process.

Michael Bisping viciously KOed Luke Rockhold in the first round at UFC 199. ‘The Count’ accepted the fight on short notice and became the first ever Brit to win a UFC title. Dana White revealed, that his first title defense would not be against a top-five opponent but rather Dan Henderson, weeks after Bisping’s upset victory.

The bout will serve as a rematch of their UFC 100 meeting and Bisping himself confirmed on Sirius XM Radio that him and Dan Hendo will meet again on October 8, 2016 in Manchester, England.