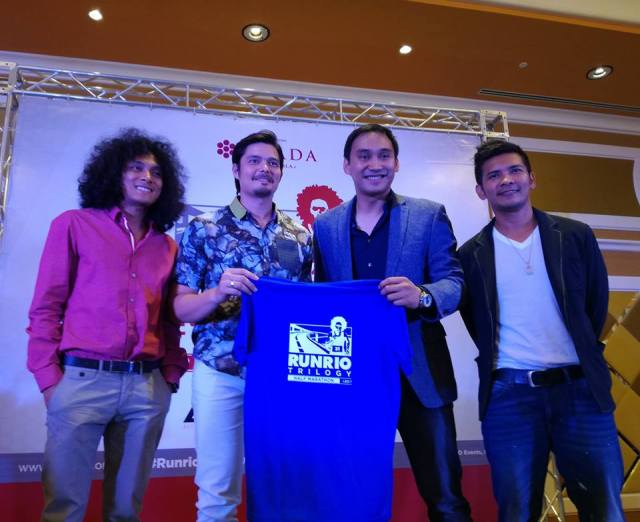 Running coach Rio dela Cruz of RUNRIO Events Inc. announces the start of this year’s most premiere running series in the country – the RUNRIO Trilogy 2017 at the Okada Manila in Paranaque City.
Bigger and better, the Runrio Trilogy Race Series 2017 is made possible by Adidas, Gatorade, & Okada Manila. This year’s trilogy solidified its desire to help the community by choosing   YesPinoy Foundation as its event beneficiary this year.

“We are excited to launch the Runrio Trilogy race series because there are many running enthusiasts out there who are looking forward to this event. This year marks the 7th year of the RUNRIO Trilogy, whose main objective is to educate runners to train and race progressively,” said award winning actor and YesPinoy ambassador Dingdong Dantes. ‘Aside from this, part of the proceeds of this year’s race series will go to the YesPinoy Foundation to support the organization’s philanthropic works” he added.
RUNRIO will also be launching its new campaign “Heart to Finish”, which is expected to become the participant’s mantra for all RUNRIO races.

“We at RUNRIO understand that people join races not just to run. It’s more because of their desire and passion to be able to finish their 21k, 32k, and 42k races with different motivations. We believe that if you run with your heart, anything is possible” said Coach Rio dela Cruz, President of RUNRIO Events, Inc.
The first of the three legs is set for June 25 and features a half-marathon run including 10Km and 5Km run. The 2nd leg set on August 13 will showcase the “Afroman Distance” which is a 32Km run, with shorter distances- 21 Km, 10Km, and 5Km. The third and final leg will cap the series on October 1 with a full marathon distance of 42 Km that also includes 21 Km, 10Km, and 5Km distances. Runners who can complete the highest distance of all 3 races will be honored at the RUNRIO Trilogy Awards Night.
“I would like to invite all  those who like running to join the RUNRIO Trilogy 2017. This unqiue running series will definitely provide runners a chance to train properly and to show how far they can go when the run with their heart,” said Coach Rio.
The most awaited race series of the year is supported by Active Health, Summit Water, and Garmin Philippines.
For more information, visit www.runrio.comor like the official Facebook page,Runrio Events Inc.
Toggle Sidebar